British sport and games tend to physically develop the youth of the country and to impose an admiration for that fair play which sport breeds.
The Standard  (Buenos Aires English-language newspaper)

Between 1870 and 1914 six million Europeans arrived in Argentina, and with more than half settling permanently by 1914 a third of the population was foreign-born, including 30,000 British.
By 1867 there was already a large British community  in Buenos Aires,  some of whom decided to form a football team to practise the sport, founding the Buenos Aires Football Club on Thursday 9th May 1867.

Today there will be a football match at Palermo; we believe it will be the first kick ever given in Buenos Ayres, and we understand that half town will be there if the weather proves favourable. The kick at the Boca never came off owing to the floods ...
The Standard  25 May 1867

This game was cancelled due to poor weather conditions, being postponed for June 26th, when the first match in Argentine football history was played. The venue was the Buenos Aires Cricket Club's field. Both teams (of 8 players each), named Colorados and Blancos, were made up of members of the Buenos Aires Football Club.

This tournament was organized two years earlier by another, short lived, Argentine Association Football League (president, F.L. Wooley), the first football league outside Europe. Five clubs competed but only one season was ever played. 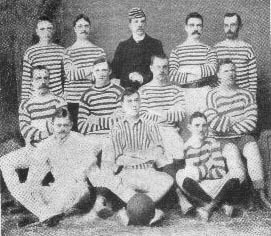