Deerstalkers were popular with referees.

When the Football Association’s Laws of the Game were drawn up in 1863 there was no mention to referees, umpires or any arbiters. However, by the 1870s it was common for association matches to be overseen by two umpires and a referee. This practice is traditionally ascribed to the advent of competitive football with the introduction of the FA Cup in 1871. Of course most football was still played by the class of men who would never knowingly seek to gain unfair advantage or deliberately transgress.
In the Alcock Internationals we see the casual approach to officialdom in keeping with the 'scratch' nature of the matches, the personnel being:
Match 1-No mention  made of Umpires and Referees, the assumption being that disputes were settled by the captains.
Match 2-Umpires - Morton Peto Betts (England) and Alexander Morten (Scotland)
Match 3-Umpires - Robert Barker (Hertfordshire Rangers, England) and William Wallace. (Wanderers, for Scotland) Referee - Charles Mansfield Tebbut (Wanderers).
Match  4- Umpires - Alfred Stair (Upton Park, England) and Gilbert Kennedy (Wanderers, for Scotland).
Match 5-Only one Umpire known - Alexander Morten  (taken from Andy Mitchell's First Elevens).

In practice each side would nominate an Umpire to whom the captains could appeal regarding any situation that arose during play. This situation was usually adequate, although the Umpires were later described in the press as 12th men on each side who could harass the Referee with pleas and arguments.
One Umpire operated in each half of the field (or more accurately each side of the field- for this purpose the field was divided lengthwise). The Referee could operate from the sidelines, but was often to be found on the field of play.

If we look at the officials involved in the England  vs Scotland internationals during the Umpire / Referee era we see a veritable Who's Who of Victorian football.  Prominent football administrators and international players past, present and future fulfilled the roles.

The inauguration of the British Home Championship in 1883 saw the introduction of neutral referees.
The 1891-92 season saw the Umpires rendered obsolete- replaced by linesmen whose powers were relatively limited, the Referee, by now, having become at least in theory, omnipotent. 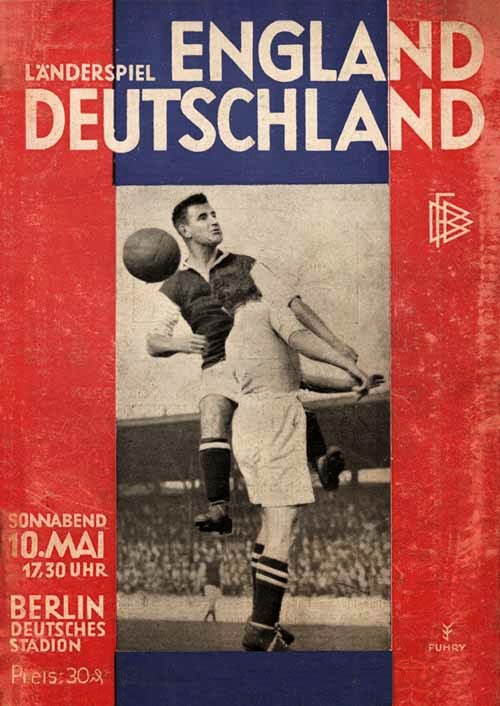 It was 1930 before England fielded a full international side against Germany. Between 1899 and 1901, prior to the formation of a German national team, there were five unofficial international matches between  teams representing the 2 nations  (the English  sides won all 5 with an aggregate of 52-4) . Between 1908 and 1913 the England Amateur XI had played Germany  4 times (3 wins, 1 draw , for 19, against 3) By 1930 however, the British were beginning to acknowledge the advances made by continental sides and were prepared to meet them on an equal footing, a fact borne out by The Football Association selection committee's decision to field the XI that had beaten Scotland in April for the friendlies against Germany and Austria.
In the days leading up to this match the German media took the stance  that Germany would not capitulate to the English, and that if they approached the match with self belief that they could win.
The match was played at Berlin's Grunewaldstadion (Deutsches Stadion) watched by a crowd of 50,000. Germany played in red jerseys and England wore their usual white.


Joe Bradford gave England the lead in the 11th minute. Richard Hofmann leveled 10 minutes later, only for Bradford to restore England's lead after 25 minutes.
Marsden suffered concussion, and did not come out for the second half.  With England reduced to 10 men Hofmann netted twice (49th and 60th minutes) to complete his hat trick. David Jack headed the equaliser 8 minutes from time. 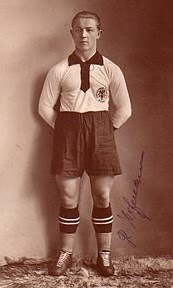 Hofmann
Hofmann was a prolific scorer: 24 goals in 25 Internationals. In September 1930 he surpassed Gottfried Fuchs' record (15). The hat trick against England was his third. He scored 5 international hat tricks in successive seasons (1928-32). 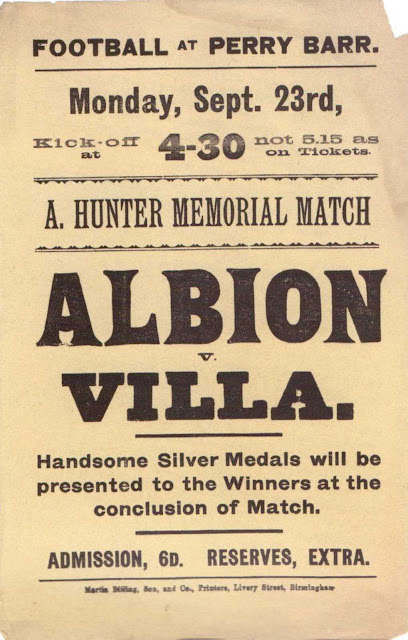 Archie Hunter died in Novenber 1894 at the age of 35.
In a League match against Everton at Anfield on 4th January 1890. Torrential rain and a quagmire of a pitch, the game reduced to 35 minutes each way.  Hunter had collapsed at half time (with Villa 4-0 down, reduced to 10 men they eventually succumbed 7-0). Press reports were that he had 'fainted' or 'had a fit'.Heart trouble appears to have been the reason for this collapse.
Hunter never played again. 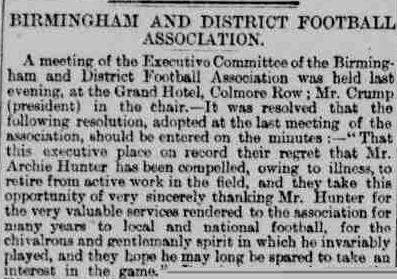 The match advertised, 'for the benefit of his widow', was played on September 23rd 1895.
The teams lined up as follows:

Jack Burton, Jimmy Cowan, Harry Devey and Denny Hodgetts had been in the Villa side the day that Hunter was taken ill.  The Baggies took the lead through  Saunders but Villa came back with 2 goals by Johnny Campbell.
It was a  busy week for Albion , having played this match on the  Monday, they faced  Walsall away on Tuesday and Aberystwyth Town away on Wednesday. 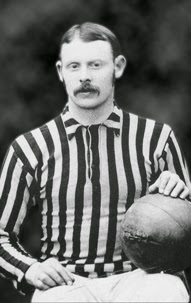