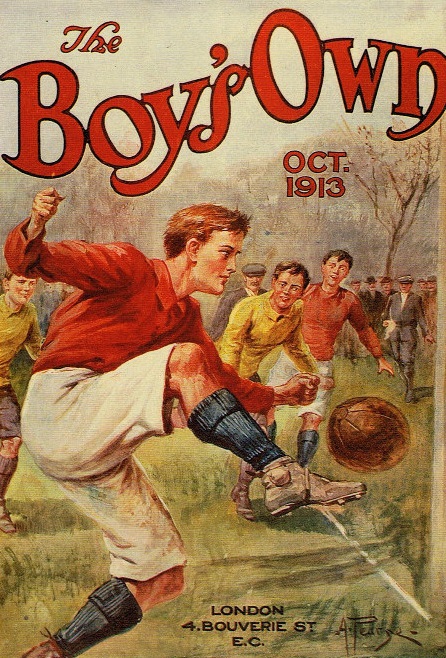 Email ThisBlogThis!Share to TwitterShare to FacebookShare to Pinterest
Labels: 1910s, Boys Own, Magazines 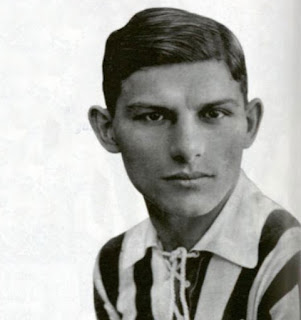 When, in the early 1930s, Club Atlético San Lorenzo de Almagro of Argentina offered the Paraguayan captain Aurelio González a lucrative deal he declined. Instead, he took a break from football in order to fight for his country in The Chaco War (against Bolivia).
In the preceding years González had won 3 consecutive championships with Club Olimpia (1927, 1928 &1929).
He led Paraguay in the 1929 South American Championship of Nations, where he was the tournament top scorer with 5 goals (2 vs Uruguay and 3 vs Peru).
González also played in both of Paraguay's matches at the 1930 World Cup.
In later life he coached Club Olimpia and the Paraguay national team. 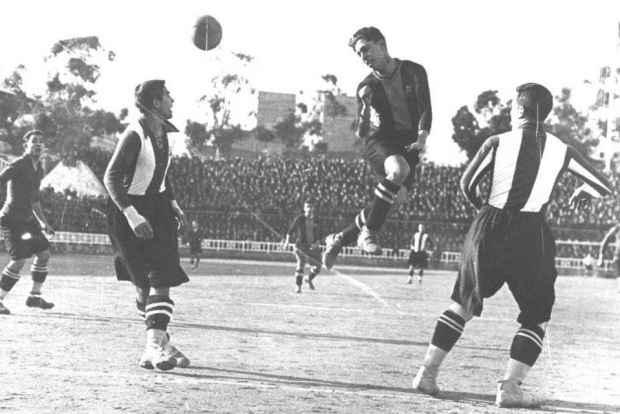 Paulino Alcántara scored 3 goals on his debut for Barcelona on 25.02.12. He was 15 years, 4 months and 18 days old, the youngest player to represent Barca.
There are a number of games in which he played for which the scorers are not recorded. 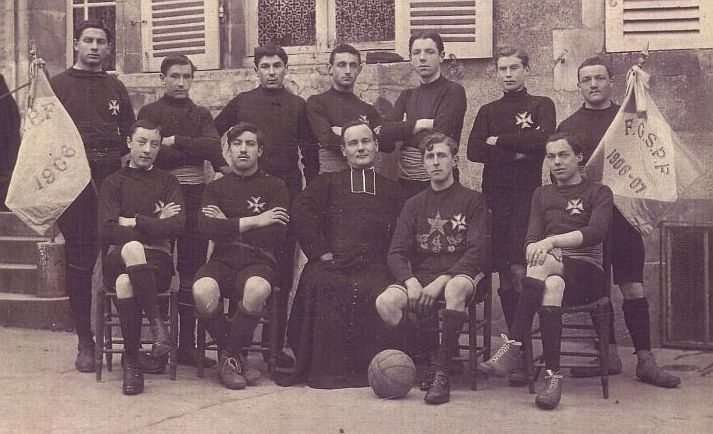 Association de la Jeunesse Auxerroise was founded in 1905 under the guidance of L'abbé Ernest Deschamps of  the Cathedral Saint-Étienne d'Auxerre. the club joined Fédération gymnastique et sportive des patronages de France (FGSPF) in 1906. They won the FGSPF champuonship of  Burgundy each season from 1906-1914. 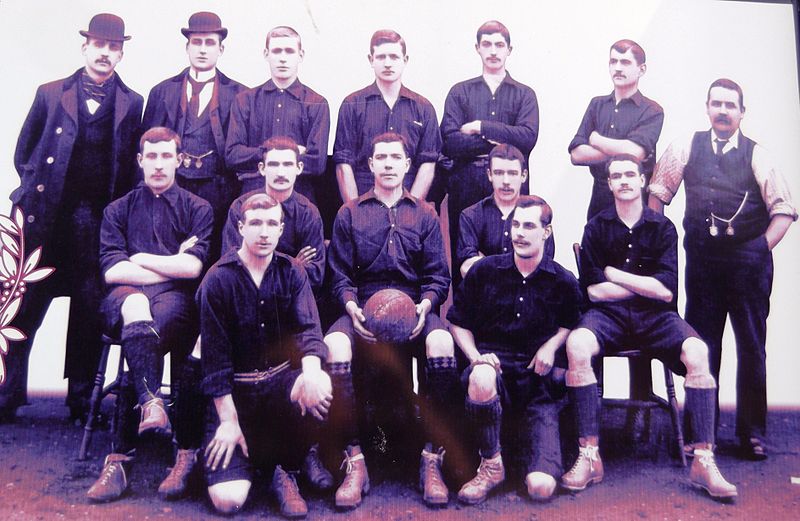 Arsenal's first FA Cup match was played at The Manor Ground, Plumstead on 05.10.1889.
The club were at this time still known as Royal Arsenal.

The opponents wre Lyndhurst, who played at Denmark Hill (Surrey). Lyndhurst were members of the Surrey FA and featured in the semi finals of the 1888-89 Surrey Cup.They also comperted in the London Senior Cup. (There is a town in the New Forest called Lyndhurst but the two are not connected).


*Some sources have Harry Offer in place of Bill Julian- Offer (England) had previously played for Swindon Town and went on to join Southampton St Mary’s.
Arsenal ran out winners by 11-0. The scorers were Barbour (3), Scott (3), Meggs (2), Robertson (2) and Horsington.
In the 2nd Qualifying round Arsenal drew 2-2 (away) with Norwich's Thorpe FC before progressing to the next round via a walkover.
FA  Founder members Crusaders were beaten 5-2 (aet) at Plumstead.
The cup run came to an end on 07.12.89 when Arsenal went down 5-1 at home against The Swifts (Slough). Swifts had reached the FA Cup semi finals 3 times in their history, but dissapeared in a merger in 1890.

The physique of the operative classes... 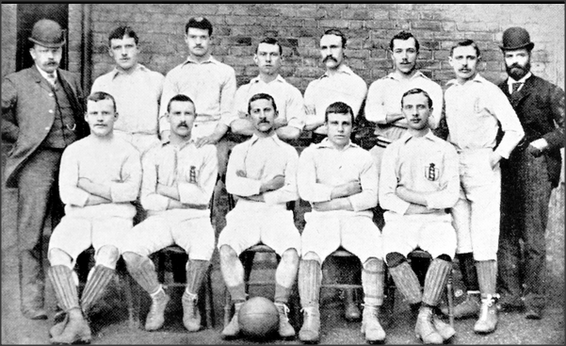 In the 1870s and early 1880s bulk and muscle had remained a considerable factor when appraising the qualities of football XIs. Accounts of the first international draw attention to the size advantage that England enjoyed, and the early 'inter class' matches such as Darwen v Old Etonians also drew attention to the physical superiority of the more privileged classes.
Until the introduction of professionalism (legally 1885 but in real terms c. 1879) working class players would have been seen as being at a disadvantage due to both long term ( the effects of poor diet and sanitation) and more immediate (50 hour working weeks) factors.
The advent of professionalism led to sinecure jobs and the evolution of training and physical preparation.,
The following , taken from Hansard, are the words of  William Coddington MP , debating the
Factories and  Workshops Bill (18.06.91). Mr Coddington was Member of Parliament for Blackburn from 1880-1906.

Before the Committee, in support of the statement that the physique of the operative classes was not to be despised, I quoted the fact that a celebrated Lancashire Football Club, the Blackburn Rovers, had won the Association Cup five times, and another Blackburn Club had won it once. I understand that the Member for Poplar, in the early part of this Debate, referred to what I had said on that point, and I believe he quoted from this very paper certain figures respecting the players. I have reason to know that those figures are inaccurate. To show that I was right in my assertion I may say that the Rovers team in 1884 contained three operatives and four sons of operatives; in 1885 it contained two operatives and four sons of operatives; in 1886 two operatives and one son of an operative; in 1890 two operatives and one son of an operative. It is quite clear that the number of operatives in that celebrated team are not so many now as they were several years ago, but that is due to the fact that football has become much more a professional game than it was a few years ago. It is a great misfortune for the town in which I live and for all the other towns which try to emulate each other in this noble game. A very fair proportion of the players in the old times, however, were operatives. The Blackburn Olympic team when it won the Association Cup in 1883 contained five operatives and one son of an operative. These facts prove, at all events, that the physique of the operative classes is not so bad as represented by some people.

Interestingly, even when professionalism had been legal for 6 years, here is how the Blackburn players of 1891 described themselves in that year's census: 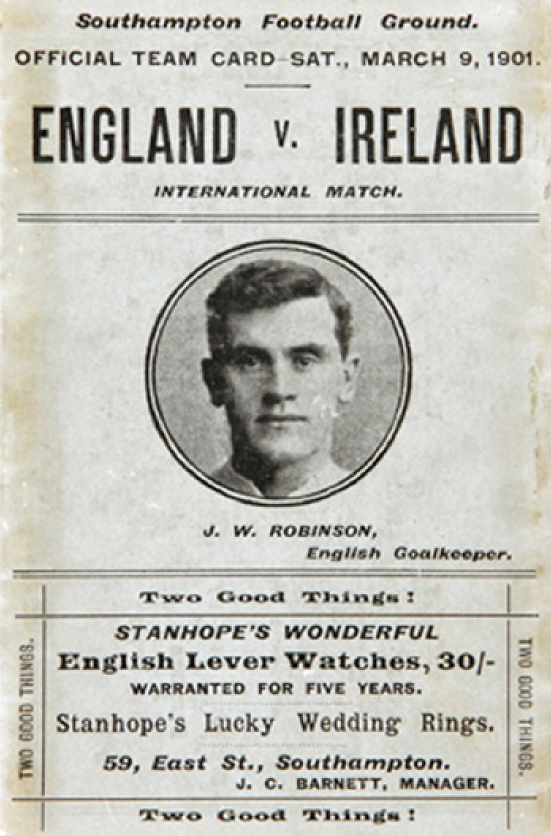 When international football came to Southampton in 1901 the selectors included 3 Saints players in the line up:

Jack Robinson - goalkeeper
Willy Meisl remembered Robinson as being the man who revolutionized goalkeeping in the eyes of Austrian spectators, being the first they had seen to dive to make saves. Robinson played 11 internationals (conceding 11 goals and keeping 5 clean sheets).

C.B Fry- right back
The legendary all round sportsman joined Southern League Southampton with the express ambition of gaining international honours. He played 25 Southern League and FA Cup matches for The Saints from 1900- 1902. In the old amateur tradition he played when free of other commitments. He was also a member of Corinthian FC and some records overlook his affiliation with Southampton. This was his only international appearance.

Arthur 'Archie' Turner- outside right
In this his second and final international appearance Turner went off in the 20th minute with concussion following a heavy challenge from Peter Boyle
He joined Southampton  in  1899, scoring 23 goals in 65 Southern League appearances. he later played for  Derby County , Newcastle United and Tottenham Hotspur. 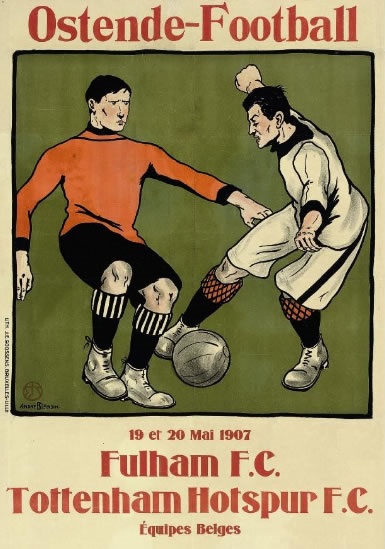 A 2 day festival of football took place at the Wellington Hippodrome, Ostend on 19th &20th May 1907.  On the 19th 2 Southern league teams,  champions Fulham and Tottenham Hotspur , who had finished the season in 6th, faced Belgian opposition.
Union Saint Gilloise were the Belgian champions.

Tottenham's scorers in the win over Union were Leipzig born Max Seeburg (3),England legend Vivian Woodward (2), George Payne (2) and Alf Whyman.
Whyman and full back Walter Bull scored against Fulham.
The attendance for the Tottenham Fulham game was approximately 1,500.
Fulham joined the Football League for the 1907-08 season, becoming the 4th London club.