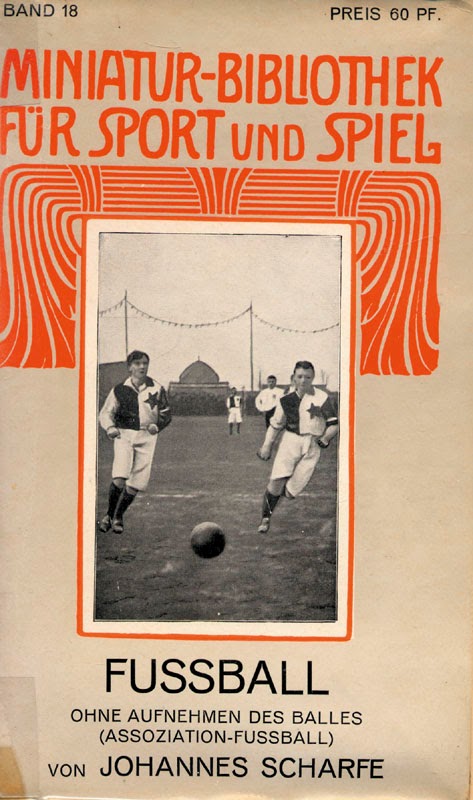 First published in 1909, this 90 page booklet was volume 18 in a series on sports and games. The title rather charmingly translates as Football Without Picking Up The Ball. Author Johannes Scharfe was a pioneer of football in Silesia , secretary of VfB Leipzig and director of the Leipzig Football Association. Herr Scharfe was also a referee.
The cover photograph appears to show Slavia Prague in action. 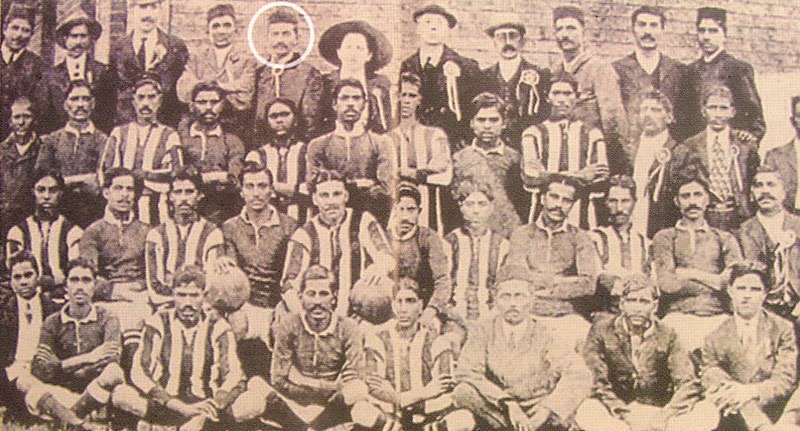 When Mohandas Karamchand Gandhi became involved in Civil Rights and anti racism in South Africa he recognized the populist force of football. In 1913 he organized football  in Natal for the Indian community. In this photograph Gandhi is circled. 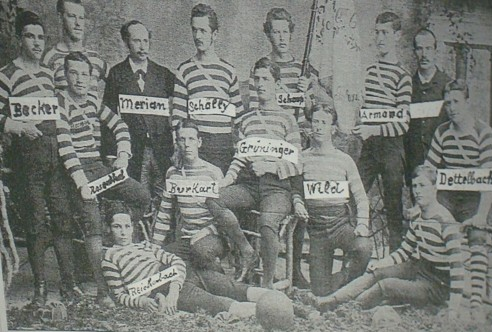 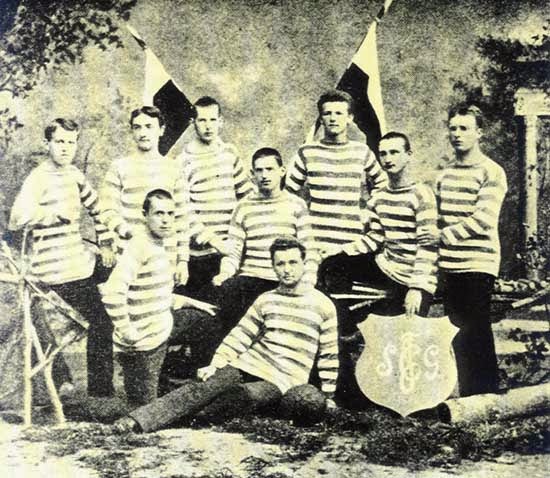 St Gallen FC, founded in April 1879,  claims to be the oldest club in continental Europe. The club was founded by young businessmen who had been exposed to football when they studied with English students.
Although the members played almost daily, the early years saw only casual football and an idiosyncratic set of hybrid rules. It was in 1892 that St Gallen's first documented fixture took place- a visit from Grasshopper Club Zürich, who protested that the goals used in St Gallen were far smaller than the regulation size. The return match in Zurich saw Grasshopper win 6-0 (they had won 1-0 with the mini goals at St Gallen). Following this fixture St Gallen adopted the standard sized goals.
The club first featured in Swiss Championship in 1899-1900 (the 3rd edition) under their temporary guise of United FC St. Gallen, but finished bottom of their group. They were champions in 1904, a feat they did not repeat for 96  years. 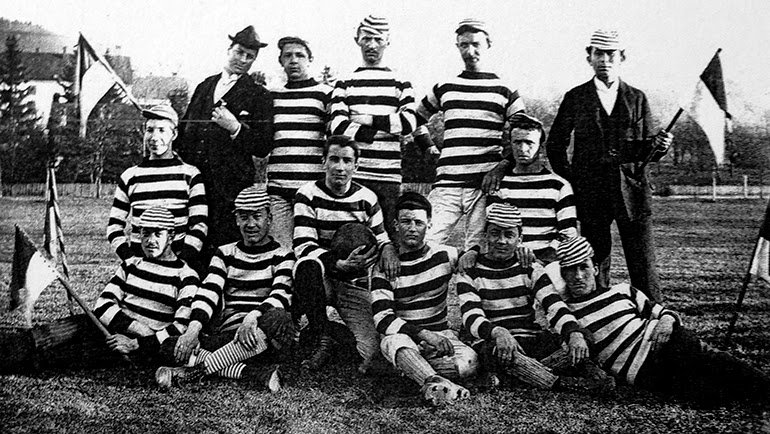 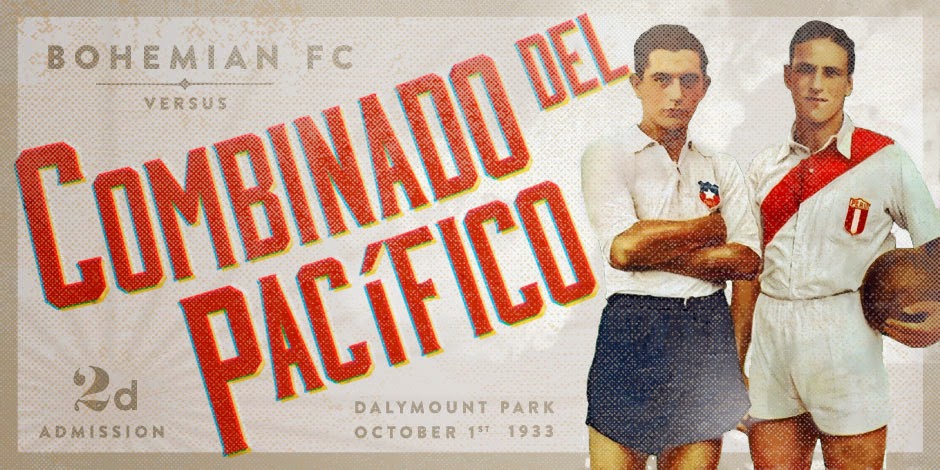 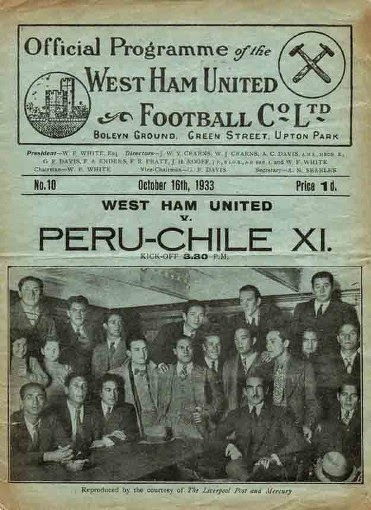 Another ambitious intercontinental tour from the 1930s saw a squad made up from 3 leading Peruvian clubs, supplemented by 3 players from Colo-Colo in Chile, travel to Europe. Colo Colo had toured Europe in 1927, tragically losing  David Arellano.
The 1933 tourists, generally known as Combinado del Pacifico , played 40 matches across 12 countries. Their fortunes were very mixed. 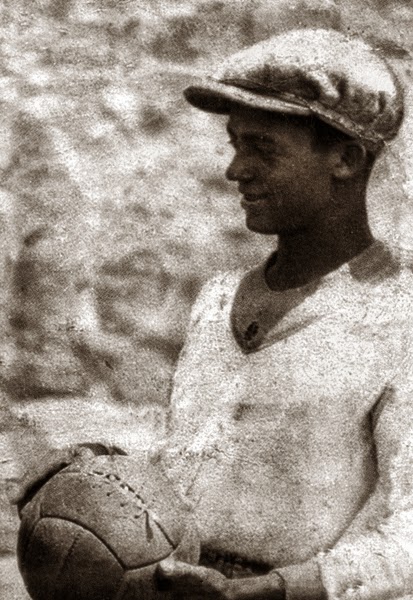 Juan 'Mago' Valdivieso- compared  by one journalist to a mechanical doll that catches the ball, and a master of saving penalties. 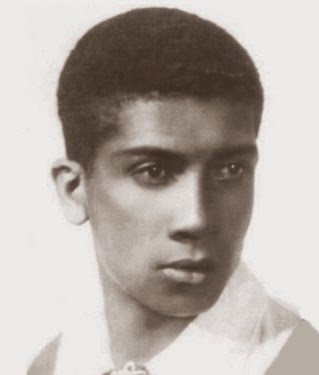 Alejandro Villanueva - A spectacular striker and notorious playboy. in 1931 his club Alianza averaged 4.8 goals a game, in 1934 they bagged 115 goals in 27 games. Manguera was league top scorer in 1929 and 1931. He was noted for the dazzling array of stepovers, nutmegs and acrobatic shots that coloued his repertoire. 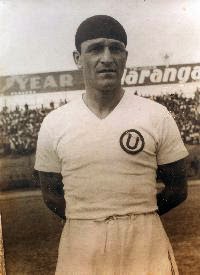