1878- Workers at the carriage and wagon department of The  Lancashire and Yorkshire Railway Company applied to their employers for assistance in forming a football team. They chose the name Newton Heath LYR (Lancashire & Yorkshire Railway) to distinguish them from another railway company team, Newton Heath Loco. The founders were based at North Road (Monsall) and their ground was near to the railway yard.

1879- The club adopts the railway company's colours,gold and green. Fixtures against other teams of railway workers.

1883-84 First appearance in the Lancashire Cup , a 2-7 defeat by Blackburn Olympic reservesOne of their matches, versus Hurst Brook Olympic on March 1st, was abandoned after 30 minutes, with Newton Heath 1-3 down, when the ball went into the river.


1884-85 Manchester and District Challenge Cup beaten in  the final by Hurst, 0-3, at Whalley Range.

1886–87 the club entered the FA Cup for the first time. Following a  2–2 draw away to Fleetwood Rangers in the 1st round, Newton Heath refused to play a period of extra time, Fleetwood were awarded the tie. Following a protest to the Football Association, Newton Heath boycotted the competition until 1889. In April The Combination season was cut short due to financial difficulties. Hooley Hill were beaten 7-0 in the final of Manchester and District Challenge Cup.
1889-90 Following another unsuccessful application  to join the Football League, Newton Heath and 11 other clubs  formed  the Football Alliance. Newton Heath finished 8th.
On their return to the  FA Cup, Newton Heath were beaten 6-1 by Preston North End in the 1st round.
The Manchester and District Challenge Cup was won again, Royton beaten 5-2 in the  final.


1890- 91 Beaten by Bootle Reserves in the 2nd qualifying round of the FA Cup.
9th place in the Football Alliance.

1891-92 beaten 2-4 by Blackpool in the 4th qualifying round of the FA Cup.
2nd place in the Football Alliance. 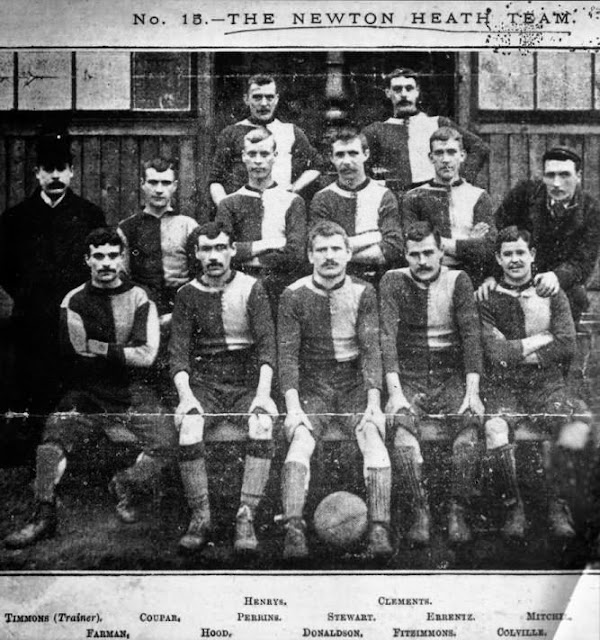 1892-93 The Football Alliance merged with the Football League. Newton Heath was elected to the First Division. Formal ties with the railway company had ended, and the "LYR"  disappeared from the name, although most players were still employees of the railway company. The club had also become a limited company, and appointed their  first full-time official A.H.Albut, who acted as manager.
Newton Heath finished bottom of the First Division but avoided relegation thanks to a win against Second Division champions Small Heath (later Birmingham City F.C.) in the playoff.*
Newton Heath were knocked out of the  FA Cup in the 3rd round, losing 0-4 to Blackburn Rovers.
Bolton Wanderers were beaten  2-1 in  the final of the Manchester Senior Cup.

1893–94 Newton Heath moved to a new ground three miles away at Bank Street in Clayton. Another kit-change  kit was again changed -green and gold striped shirt, navy kickers and socks.After finishing 16th in the league Newton Heath became the first team to be relegated to the Second Division following a  2–0  defeat by Liverpool in the playoff.
Exited the FA Cup through a 1-5 loss to Blackburn Rovers in a  2nd round replay.

1894-95 Colours changed to plain green with gold trim.
On 9th March the manager of visiting Walsall Town Swifts registered a complaint against the state of the Bank Street pitch; drab expanses of wet sand, tufted sparsely with grass. The game went ahead and Newton Heath beat Walsall Town 14–0, but the result was scratched. Newton Heath won the rearranged fixture 9-0.
Newton Heath finished 3rd in Division 2 but lost 2-3 to Stoke in the playoff.
Stoke also knocked Newton Heath  out of the  FA Cup , 2-3 in the 1st round. 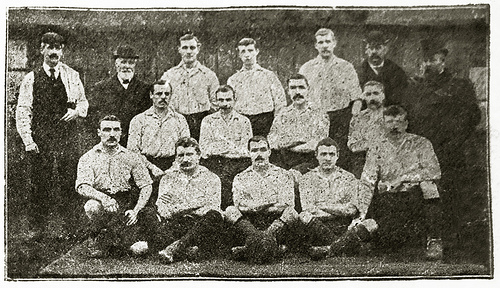 1900-01 Faced with a poor season both in terms of results and receipts, Newton Heath held a four-day bazaar to raise money at St James Hall, Manchester. One of the attractions was a St. Bernard dog with a collection tin around its neck. The dog ran away and was found by businessman John Henry Davies.  Davies' daughter fell for the dog. It was this episode that would inspire his later financial rescue of the club.
10th in div. 2. Knocked out of the FA Cup by Burnley after a replay in the 1st round, 1-7.

1901-02 On 9th January,Club President William Healey applied to the court for a winding-up order against the club, claiming he was owed £242 17s. 10d.

Attention was directed to the Second League by the unusual experience of Newton Heath. The club is financially in a bad way. A winding up order to meet a debt of £242 precipitated matters last week and no arrangements could be made for playing the game fixed for Saturday. One hears that a new club will be formed out of the ashes of the old one, but this has not been decided definitely.
The Manchester Guardian 13th January 1902

Newton Heath were revived in time to play their next fixture on Saturday, 18th January 1902, by a £2,000 investment from a group of businessmen led by John Henry Davies  .
Lost 1-2 to Lincoln City2–1 in the Intermediate Round of the FA Cup.
Newton Heath's last game of the 1901/1902 season was a 2 - 0 victory over Chesterfield in front of only 2,000 spectators. The team finished the season in 15th and Newton Heath ceased to exist.
John Henry Davies became the club president, and on 24th April 1902.  given that the  was no longer based in Newton Heath, the new owners  considered renaming the club Manchester Celtic or Manchester Central. But, having  also changed their  colours back to red and white, the club began the 1902–03 season as Manchester United. 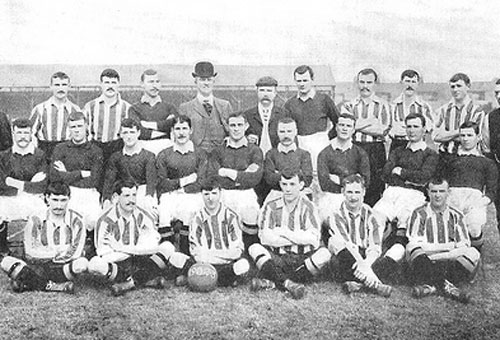 
* the playoffs were, during this era, referred to as test matches.