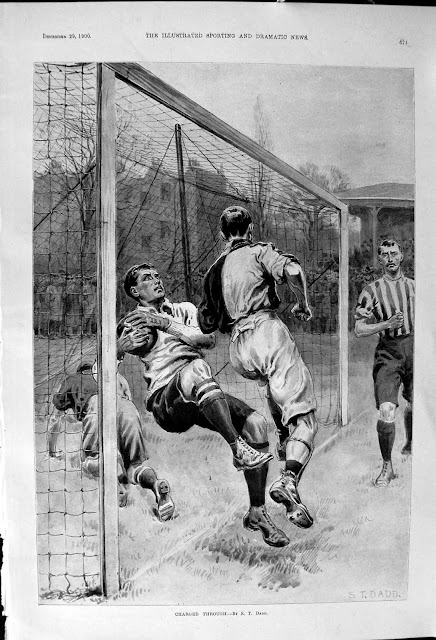 An Attacking Player Gives the Keeper a Firm Shoulder Barge Sending Him into His Own Net by
S.T. Dadd

In the early days of Association football a 'fair catch/ free kick from mark' rule had existed. This was abolished in 1869, and the discrete position of goalkeeper established.

Early football was more of a contact sport, and a goalkeeper was considered just as fair game as his outfield comrades. Scrimmages and rushes were important features of the game, and the 'charge' (knocking the player off the ball) seems to have been favoured over a purely ball winning tackle.  Wrexham's 1878 Welsh Cup win serves as an example of these tactics in action. -the Wrexham forwards charged the Druids' defenders to take the ball over the line to win the game in the final minute.
Most goalkeepers relied on punching the ball away rather than clean catches, unless they were particularly robust or were able to dodge the oncoming forwards like a Rugby outside- half.
Rule changes  in 1894 were supposed to offer the goalkeeper more protection- indeed a contemporary international * stated:
The last part of Rule 10 says, 'The goalkeeper shall not be charged except when he is holding the ball, or obstructing an opponent'; and it is seldom, and not for long, that the custodian is in contact with the ball. It is safe to say that the goalkeeper is the best protected man on the field.
To understand the significance of this you have to appreciate that at this time it was legitimate to shoulder charge any opponent, regardless of whether he had the ball or not, so goalies could be taken out in order to clear the path to goal. It was still considered fair to charge the goalie with the ball!
There is an example recorded in the South Essex Gazette (1898) of West Ham scoring against Brentford when two forwards bundled the goalkeeper into the net whilst he had the ball in his hands ! 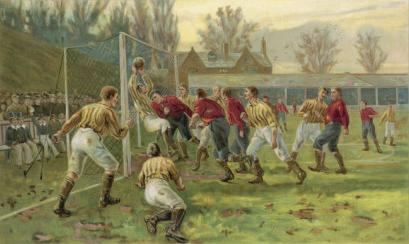 Thomas M.M. Hemy shows similar tactics deployed, to the delight of the Harrovian schoolboys behind the goal