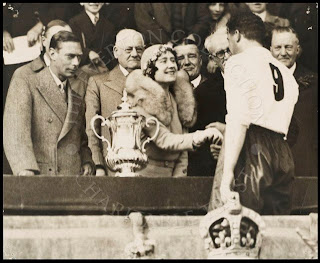 Dixie Dean collects the cup in his number 9 shirt. 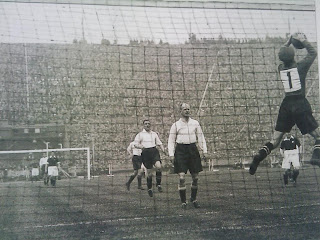 Ted Sagar- Number 1.
The things we take for granted...

Never mind names and distinctive squad numbers, up until the 1939-45 War, players didn't even sport numbers on their shirts.
Before 1909 the spectator (and ,I'm surmising, the referee) also had to deal with the fact that the goalkeeper wore the same colours as his team mates!
The fist use of numbered shirts in Association football occurred in Australia as early as 1911 , an idea borrowed from Australian Rules Football saw compulsory shirt numbering in the Sydney Leagues in 1912.
In Britain nothing was done to follow this trend until the late 1920s. The advantages of shirt numbering were obvious- Herbert Chapman and Sir Fredrick Wall both spoke in favour of it as a means of enhancing a spectators understanding and appreciation of the game.
Two matches were played in 1928 in which shirts were numbered. Chelsea vs Swansea Town at Stamford Bridge, and Sheffield Wednesday vs Arsenal at Hillsborough.
In the Chelsea Swansea game only the outfield players were numbered (2-11).

The 35,000 spectators were able to give credit for each bit of good work to the correct individual, because the team were numbered, and the large figures in black on white squares enabled each man to be identified without trouble
The Daily Express 27th August 1928

Numbered Jerseys A Success
I fancy the scheme has come to stay. All that was required was a lead and London has supplied it.
The Daily Mirror 27th August 1928

But the lead was not followed, although Chelsea did wear their numbered jerseys on a tour of Argentina, Uruguay and Brazil in the summer of 1929, earning the nickname Los Numerados.

A few experiments were made with numbered shirts in 1933- in March, England wore numbers in a trial match at Fratton Park.
The most famous development came in April 1933, when shirt numbers were worn for the first time in the FA Cup final.  Everton players wore numbers 1 to  11 and Manchester City numbers 12 to 22.
The following week Everton wore their numbered shirts in a Football League match against Wolverhampton Wanderers at Molineux.
But at its annual general meeting in 1933, the Football League Management Committee rejected a proposal requiring shirt numbers after hearing objections that it would cost too much and spoil club colours.


On December 4th, 1933 Arsenal wore numbers for a friendly match with F.C Vienna at Highbury.
The wearing of numbered shirts was still rejected by the Football League Management Committee during the 1934 general meeting.
England wore numbers  in their 3-1 loss to Scotland at Hampden Park in Glasgow on 17 April 1937.
It was in 1939 that numbering was finally accepted in top level British football.