Scottish Teams in the FA Cup

Queen's Park of Glasgow held a position of unassailable preeminence in the early Scottish game. They were responsible for bringing the Football Association's rules to Scotland, and, unsurprisingly, affiliated themselves to the (English) FA. This fraternization extended, naturally, to entering the first organized Association football competition.
So, in 1872 Queen's Park entered the FA Cup, and for the first decade of it's existence they would represent the only Scottish involvement in the competition. But, as we will see, their participation was not exclusive.
In the first round Queen's Park were drawn at home to Donington School (Lincolnshire) the tie was not fulfilled, but due to teams scratching both sides were carried over into round 2. Donington scratched and Queen's Park advanced into the Quarter Finals, where they were given a bye. So, having reached the semi-finals without kicking a ball, Queen's park met Wanderers in a goalless draw at the Oval. The replay was scheduled for the same ground, and Queen's park scratched because of the expense and inconvenience of having to return to London for the replay.
In the 1872-73 season, Queen's Park entered the FA Cup again, and  were given byes until the semi-finals in order to reduce the amount of travelling necessary. Having thus progressed to the last four without playing a game Queen's Park withdrew anyway when they were drawn away at Oxford University.

1873–74 saw the introduction of the Scottish Cup, which was won by Queen's Park.

The 1875-76 season saw Clydesdale entered for the Cup, but their opponents, South Norwood, had a walk over in the first round, presumably because Clydesdale decided not to travel south. this was Clydesdale's only foray into the FA Cup.
The 1876-77 season saw Queen's Park again presented with two byes and then withdrawing from the competition when faced with an away tie at  Oxford University.
In 1877-78 a bye in the first round for was followed by an away tie with Druids (North Wales), which Queen's Park withdrew from.
This pattern of Queen's Park entering and withdrawing when drawn away from home continued in the 1879-80 1880-81, 1881-82 and 1882-83  seasons ( Sheffield , Sheffield Wednesday, Accrington and Grimsby Town  respectively being awarded  first round walk overs). Incidentally a team called rangers featured in the FA Cup in 1880-81, but this was not the famous Glasgow Club, but a team based in London.


1883–84 saw Queen's Park make it all the way to the final. In the year in which they also won the Scottish Cup for the 7th time they illustrated the gulf in class between the leading sides and the emerging English provincial teams with a dazzling cup run. In the first round the Glasgow side traveled to Crewe Alexandra and won 10-0. They followed this with a 15-0 home win against Manchester (no connection with either United or City). In the third round Oswestry Town were beaten 7-1 (away). The fourth Round saw the biggest scalp- Aston Villa beaten 6-1 in Hampden (Caithkin). Old Westminsters were beaten 1-0 in London.

In the semi final Blackburn Olympic, the holders, were well beaten, 4-0 in Nottingham.
In the final at Kennington Oval Queen's Park were beaten 2-1 by Blackburn Rovers. It was a controversial result in Scottish eyes. Queen's Park had two goals disallowed before Blackburn had scored, one historian recording referee Major Francis Marindin's views on off-side as being ''peculiar and vain'.
In this cup-run Queens Park had the impressive record of played 7, won 6, lost 1, for 44 against 4. 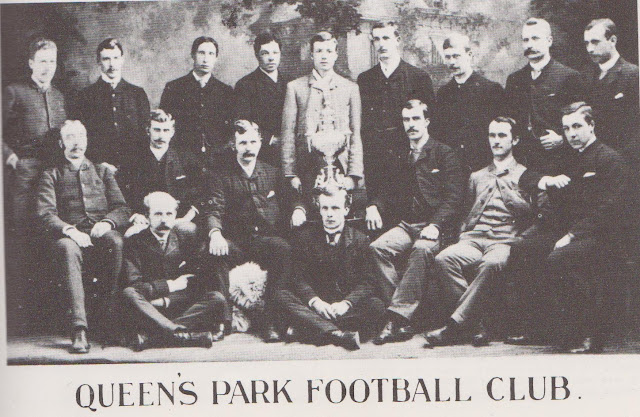 In 1884-85 Queen's Park reached their second successive FA Cup Final. They were presented with a walkover by Stoke in the first round before beating Crewe Alexandra 2-1 at home in the second. The third round saw them travel to Leek and win 3-2. In the fourth round Old Wykehamists were beaten 7-0 at . In the 5th round they received a bye and then beat Notts County 2-1 in Derby following a 2-2 draw at Nottingham.
Nottingham forest and Queens Park drew 1-1 at Derby and Queen's park took the replay (played at Merchiston Castle School, Edinburgh) 3-0 to set up a second cup final meeting with Blackburn Rovers.
This time Blackburn triumphed by 2-0. 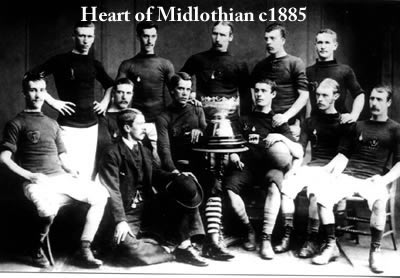 
October 31st 1885 gave us the unprecedented spectacle of an FA Cup match being played between 2 Scottish teams in Glasgow- Queen's Park beating Partick Thistle 5-1.
Rangers did not contest their first round match at Rawtenstall, nor did Heart of Midlothian, drawn away at Padiham. Third Lanark beat Blackburn Park Road 4-2 at home in their first round match. Both drawn away to Lancashire clubs (South Shore and Church) in the second round, Queen's Park and Third Lanark withdrew from the competition.

Queen's Park were beaten 3-0 at home by Preston North End, whilst visits to Darwen saw Cowlairs beat  Darwen Old Wanderers 4-1 but  Heart of Midlothian thrashed 7-1 by Darwen. Partick Thistle enjoyed a 3-1 win away at Blackburn Olympic. Third Lanark entertained High Walton to a 5-0 beating and Everton pulled out of their away match to Rangers.
in the second round for all the Caledonians fared as follows:- Rossendale 2-  Cowlairs 10, third Lanark 2- Bolton Wanderers 3, Rangers 2- Church 1, Partick Thistle 7-Fleetwood Rangers 0, Blackburn Rovers 0- Renton 2 (following a 2-2 draw at Renton).
In the third round Rangers and Cowlairs were drawn together, Rangers winning 3-2, Renton were beaten 2-0 at home by Preston North End and Partick Thistle were rewarded for their trip to Ireland with an 11-0 win over Cliftonville.
Rangers and  Partick Thistle received byes in the fourth round.
The fifth round saw Partick Thistle travel to London for a 1-0 loss to Old Westminsters. Rangers beat Lincoln City 3-0 at Ibrox.
Old Westminsters visited Ibrox for the sixth round, where Rangers won 5-0.
Rangers faced Aston Villa in the semi final at Crewe and lost 3-1.

In May 1887 the Scottish Football Association forbade Scottish clubs from membership of any other national association,which put a stop to further participation in the FA Cup by  Scottish clubs.

The 93rd Highland Regiment took part in the 1890-91 FA Cup, losing 2-0 to Sunderland Albion, but they came under the wing of the Football Association, being a part of the British Army FA, formed in 1888.