The Liga de Football Association Amateur was founded in June 1902, and a national Mexican championship was held during the 1902/03 season , each team playing each other once. The league was formed by Duncan Macomish, Thomas Hanghey and Percy Clifford . Five clubs took part,  three from the capital and two the provinces. All of these clubs were essentially English in origin, and it was a few years before Mexican players began to make an impact.


The first champions, Orizaba Athletic Club (Albinegros de Orizaba) came from  Veracruz state.The club was founded by textile workers and European technicians in 1898. During the1902/03 season Orizaba had an exclusively  British squad .
The club was founded by a Scot, Duncan Macomish, who owned a  steel company. 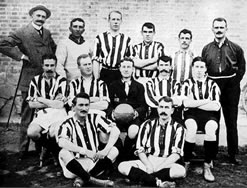 Reforma was founded in 1894 by a group of Englishmen in Mexico City as a sports and social club.

British Football Club, based in Mexico City, was founded in 1902 by Percy Clifford, a Cornish immigrant, who at the time was a member of the Club Reforma.

Pachuca Athletic Club was founded in 1900 by Cornish mining engineers and workers of the Compañía Real del Monte. Pachuca is in Hidalgo state.
Pachuca was also an English dominated club- David Islas was the first  Mexican to play for them, in 1908.
Wikipedia credits Alfred C. Crowle as being  'the man who first introduced the sport to the mine workers, bringing the first footballs and the rules'. In fact Crowle, who was born in Mexico (his parents were from Cornwall), joined Pachuca in 1904 as a 13 year old. He played for the club for 23 seasons, and in 1935 became manager of the Mexican national team.