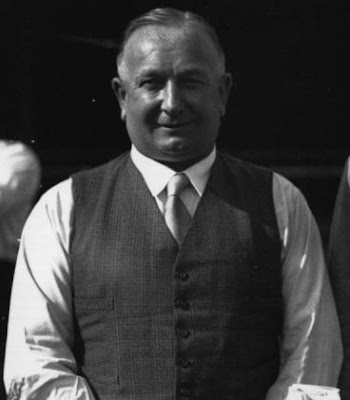 Herbert Chapman (1878-1934) was once described as the first manager who set out methodically to organize the winning of matches. He is famous for his role in bringing about the change in the traditional 2-3-5 formation to the WM (3-2-2-3). Chapman also questioned the wisdom of the prevailing tactics of the day- wingers dribbling to the by-line and centering the ball, which he dismissed  as giving the advantage to the defenders. He favoured inside play, the ball being moved incisively into the danger area via the inside forwards. Bernard Joy wrote that Chapman's tactical innovations significantly altered the role of every outfield player. But he also made innovations in other areas. He introduced team talks and tactical discussions. He put the white sleeves onto Arsenal's jerseys, believing that they would be more easy for teammates to pick out with their peripheral vision. Chapman was an enthusiast of continental football. he advocated international club competition and even tried to bring overseas players to Arsenal when this was almost unheard of. Floodlit football and shirt numbering were other causes he championed.
On a lighter note Chapman was the first manager to arrange for music to be played over the PA before the match and during half time.

Do clubs realise to the full today the importance of the man who is placed in control? They are ready to pay  anything up to £4000 and £5000 for the services of a player. Do they attach as much importance to the official who will have charge of the player? the man behind the scenes who finds players, trains talent, gets the best out of the men at his command is the most important man in the game from the club's point of view.
The Sporting Chronicle 1925