This is the first recorded mention  of football in Spain , written in the visitors' book of an inn at  Gaucin in September 1874 by a Captain W F Adams:
Marched out from Huelva on Wednesday and played football with some railway workers. The only diversion we truly had.


If you Google history of football in Spain you will throw up many references to Aaron Collins FC, formed on December 23, 1889 by Dr. Mackay and British workers employed by the Rio Tinto Company.
In fact the club formed by Dr. Mackay on that very date was Huelva Recreation Club (later Recreativo de Huelva). None of the material on the life of Dr McKay or the origins of Recreativo de Huelva makes any reference to this phantom team- myth and history merge in the cut and paste era. 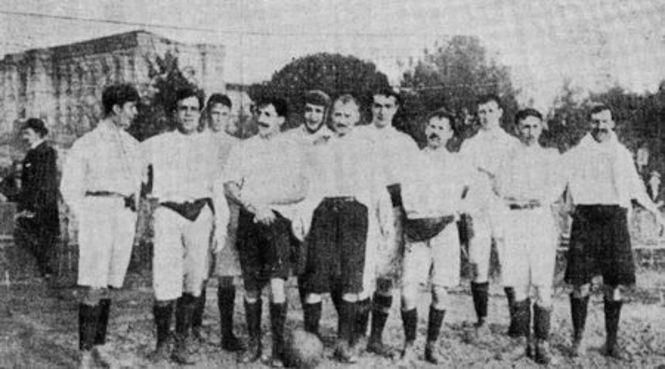 Huelva Recreation Club was founded on December 23rd, 1889 by the Scotsmen, Alexander Mackay and Robert Russell Ross, who worked at the Rio Tinto Mining Company.  The men were  doctors and they founded the club in order to provide the mine workers with physical recreation.
In 1884, Dr. Mackay had joined the Club Inglés and created the Sociedad de Juego de Pelota (Ball Game Society), which organized football games along with other typical British sports.
Dr. Mackay decided to create a sports club in Huelva, the capital of the province. The first meetings of the club was in December 18th 1889 in the Hotel Colón. The meeting was organized by Dr. Mackay along with a German businessman, Wilhem Sundheim,

The first organized game played in Spain took place in Seville on March 8th, 1890 at the Tablada Hippodrome. Recreativo de Huelva played against Sevilla FC, a team made up of workers from the Seville Water Works. With the exception of two Spanish players on the Huelva team, all the players on both teams were British.

* The player 5th from left appears to be wearing a scrum cap like Petr Cech!