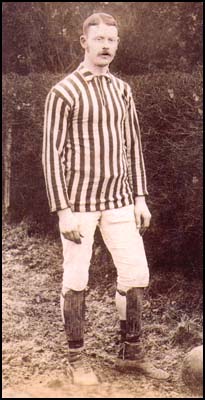 Archie Hunter was a prince of dribblers. It was not an unusual performance of his to start at the half way mark, and dribble through the whole of the opposing team! he would not lose the ball until he had literally dribbled it between the posts.
Alfred Gibson and William Pickford in Association Football And The Men Who Made It (1906)

Archie Hunter joined Aston Villa from Ayr Thistle in 1878. Records of his career are incomplete because most of his games were played in the pre Football League era. He was never capped for Scotland because he played for an English club (this was the convention at the time). Hunter was captain of Villa when they won the FA Cup for the first time (1887). His career ended prematurely when he suffered a heart attack in a game against Everton in 1890, at the age of 31. He died four years later.