The Evolution of the Offside Law 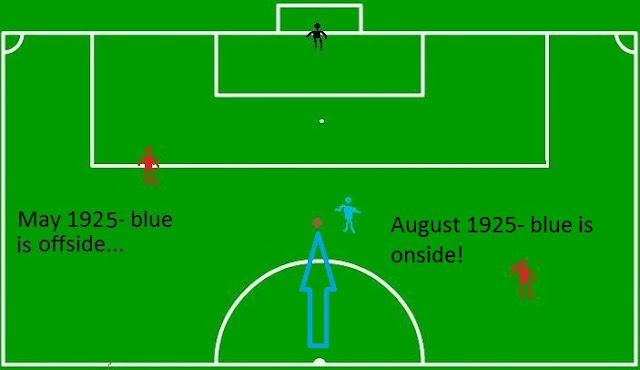 1863- According to the original  laws of the game, any player who was in front of the ball (i.e- nearer to the opponents goal line than the ball) was offside.

1866- A player was onside if he was in front of the ball if there were three defensive players between him and the goal.*

1873 - Offside was judged by the position of the player when the ball was played, rather than when the he received it.

1903 -It is not a breach of Law for a player simply to be in an off-side position, but only when in that position, he causes the play to be affected.

1907- A player can only be offside in the opposition's half.

1924-25 - The offside trap had become the bane of the game. Offside tactics were squeezing down the space in which attackers could operate, making for a dull spectacle. 4,700 goals were scored in the Football League -an average of 2.58 goals per game.

1925- The FA considered introducing a 40 yard line - a player could not be offside if he had not crossed this line when the ball was played. This was rejected in favour of  reducing the number of defensive players that needed to be between an attacking player and the opponents goal in order for him to be onside from three to two.


* This is the more relaxed Queen's Park variant that shaped the development of the passing game in Scotland:
Sixth.—When a player has kicked the ball, any one of the same side who is nearer to the opponents' goal-line is out of play, and may not touch the ball himself, nor in any way whatever prevent any other player from doing so, until the ball has been played, unless there are at least two of his opponents between him and their own goal, who must not be more than fifteen yards from the goal-line; but no player is out of play when the ball is kicked from behind the goal-line.