Throughout most of the 74 year period covered by this blog, 2-3-5, or the pyramid, was the dominant formation in football.
The emphases in early association football were on attack and individual skills. Formations, such as they were, consisted of a goalkeeper,a half-back and a three-quarter as defenders, with eight forwards.
In the 1870s one full-back, two half-backs and seven forwards became more common.  It has been suggested that Wrexham was the first team play three half backs and five forwards, but the durability of the system was cemented by the success of Preston North End in the 1880s. This was in no small part due to the introduction of Scottish players into the leading English clubs of the day; the "Scottish style"  placed more emphasis on passing than dribbling.  The pyramid established a balance between attack and defence: the two fullbacks were responsible for the opposition wingers, while the halfbacks sought to neutralise the other three forwards. The centre half had a key role in both orchestrating the team's attack and marking the opponent's centre forward.  The pyramid system was prevalent until 1925 when the  offside rule was amended, and teams sought ways of turning the change to their advantage. 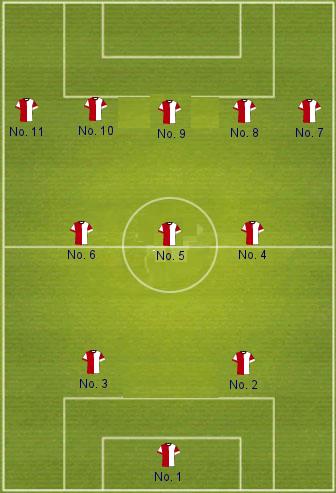 6-Left half
5-Center half
4-Right half


(note: shirt numbers were not introduced until 1928).