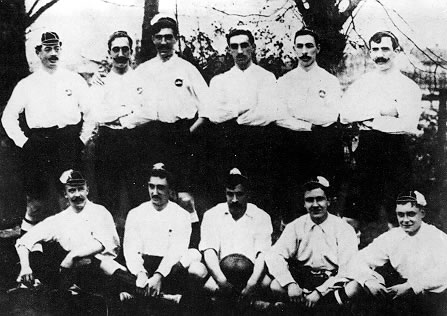 Club Bizcaya 1902
Football was introduced to Spain as early as 1889, the first club,  Recreativo de Huelva  , being formed  by  British workers employed by the Rio Tinto Company. The first official game played in Spain took place in Seville on March 8, 1890. Sevilla FC (a team made up of eleven British workers from the Seville Water Works) played Recreativo de Huelva (9 British and 2 Spanish players).
The first national competition was introduced in 1902. Some sources cite this as being the inaugral season of the Copa del Rey, but in fact the Copa de la Coronación, to celebrate the coronation of King Alfonso XIII,was a distinct, one-off event.
Five teams were represented:
Madrid FC (later to become Real Madrid)
FC Barcelona
Club Español de Foot-Ball (also of Barcelona)
New Foot-Ball de Madrid
Club Bizcaya* (a team made up of players from Athletic Club and Bilbao FC)

The two Bilbao clubs were founded in 1898 and 1900 respectively. They merged in 1903, becoming Athletic Bilbao.

Despite Bilbao's strong connections with Britain, only 2 British players featured in the Club Bizcaya line up, the rest being Basques:

* or Vizcaya. The Province of  Biscay in Spanish is Vizcaya and in Basque it is Bizkaia. The name Bizcaya appears to be something of a hybrid.