Until 1924, the laws of the game forbade scoring directly from a corner kick. In the 1924 Olympics  Uruguay's Hector Scarone netted directly from a corner on two occasions, against Yugoslavia and Switzerland. This prompted the  Uruguayan FA to canvas for a change in the rules and allow goals to be scored in this fashion.If this version of events is true then the authorities acted with an urgency that today's governing bodies would not countenance. The Uruguay Switzerland game was played on June the 9th and the change was authorized at a meeting of the international Football Association Board (IFAB) on June the 15th!
So, when the 1924-25 season got underway in Europe, it was permissible for a corner kick to go directly in.
And it didn't take long for it to happen,either.
On August 21st Billy Alston of Edinburgh's  St Barnard's scored directly from a corner in the Scottish Second Division match against Albion Rovers.

So, the feat of scoring directly from a corner is known as A Billy Alston Goal? Not quite.
As South American fans or students of  Eduardo Galeano  will tell you, it's known as An Olympic Goal (Gol Olimpico).
On  October 2nd, 1924, during a 'friendly' match between Argentina and Uruguay in Buenos Aires Argentine winger Cesáreo Onzari netted from a corner in the 15th minute. 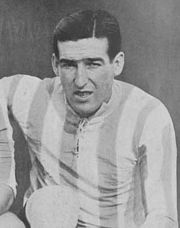 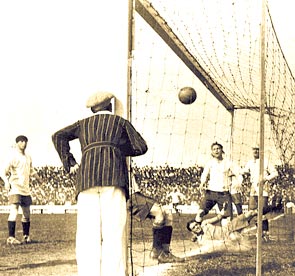 Top: Cesáreo Onzari. Bottom: Goal line technology? The referee (in striped blazer) leaves nothing to chance with his excellent positioning as Onzari's goal sails in. 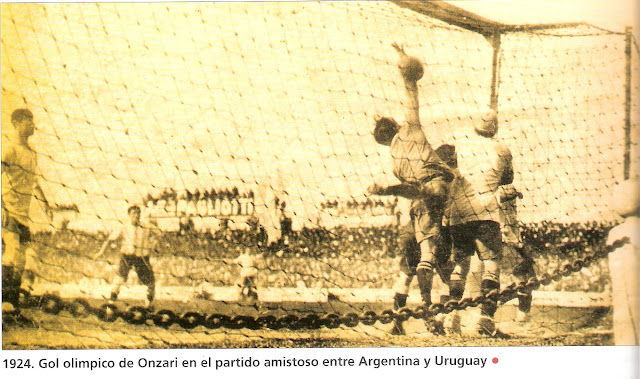 The first incidence of an Olympic goal scored in the English First Division came on 11 October 1924.Billy Smith scored direct from a corner as Huddersfield Town beat Arsenal 4-0.