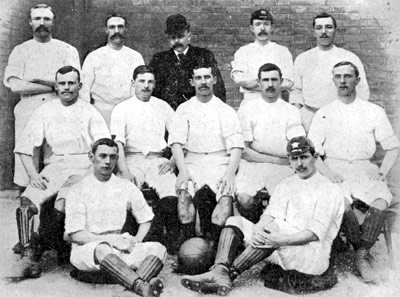 William (Billy) Townley was born in Blackburn in 1866. He played football for Blackburn Swifts and Blackburn Olympic before joining Blackburn Rovers at the beginning of the 1888-89 season.
Townley won his first international cap in 1889. The following year he scored two goals in England's 9-1 victory over Ireland .
Townley was a two-time FA Cup winner with Blackburn Rovers.
In 1890 he became the first player to score a hat-trick in an FA Cup final as Rovers beat The Wednesday 6-1.
In 1891 he scored in the final as Notts County were beaten 1-0.
Townley was a schoolteacher by profession, but when his playing career was ended by a serious head injury whilst with Manchester City, he decided to pursue a career in coaching. Opportunities being limited in Britain, he moved to the continent.

Starting with DFC Prag (a team from Bohemia who were part of the German Football Association) , Townley managed (or coached) numerous clubs in Germany and Switzerland, including Karlsruher FV (who he guided to the National Championship in 1910), FC St Gallen, 3 spells at Bayern Munich and 4 spells at  SpVgg Fürth (winning 2 National Championships).

Townley also coached the Netherlands to the semi finals of the 1924 Olympic tournament.