Billy Meredith's career path is a good illustration of the way in which football developed in the 1890's -1910's.
When Billy Meredith was a boy the growth of  rail travel enabled him to venture  to the North West of England to watch big teams in action.
Playing initially for Chirk AAA he moved to Northwich Victoria for some financial reward, following  the example of his brother who was at Stoke.
Northwich Victoria were a struggling side, and in 1894 Meredith returned to Chirk, where he worked in a coal mine and rejoined  Chirk AAA, winning the Welsh FA Cup with them that season. When professional clubs from across the border tried to secure his services they were met with strong resistance from the locals, including Meredith's mother.
Meredith eventually signed for second division Manchester City, but as an amateur. He continued in his job at the pit, commuting  for matches. Meredith turned professional in January 1895. The City squad included other 'imports' from Wales,and typically at this time, a significant number of  Scots .When Meredith made his Wales debut in March 1895 it was alongside players from Oswestry United ,Chirk AAA and Newtown FC.
In his second full season Manchester City won promotion via the 'test match' (play offs) and Meredith finished as top scorer.
He scored the winning goal in the 1904 FA Cup Final as City won their first ever major trophy.
Meredith  featured in a match fixing scandal that led to him leaving Manchester City and joining their lesser neighbours Manchester United.  He was also active in demanding higher wages for players.
Meredith was playing for Manchester City at the age of 49, and was Wales' oldest ever international at 45. 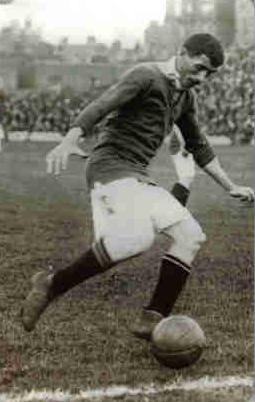