In order to further the interests of the Association in Scotland, it was decided that during the current season, a team should be sent to Glasgow to play a match v Scotland.
Minutes of The Football Association, October 3rd 1872. 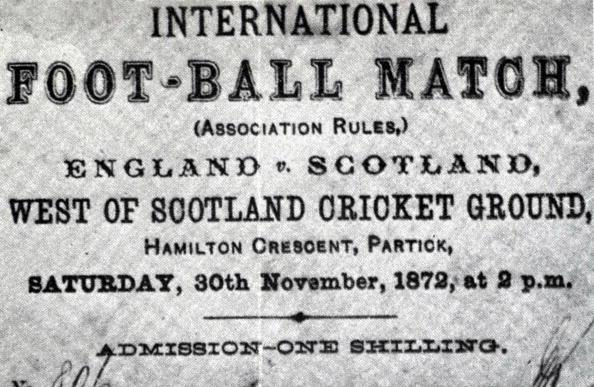 The Scotland teams for these matches were made up mostly of London based Scots or Englishmen with Scottish connections. In fact the Scotland teams for these early fixtures were selected by the FA! The possibility of Scotland challenging England with a 'homegrown' team was also hampered by the fact that the FA's rules had not been widely adopted in Scotland.
The Queen's Park Club of Glasgow took up the FA's challenge and consequently the first official international football match was played. The Scots had not originally intended to field an XI of Queen's Park players, but the absence of two English based players left  Queen's Park players completing  the strongest available line up.

(All of Queen's Park)

The first ever case for goal line technology occurred when Scotland had a goal disallowed in the first half after the umpires decided that the ball had cleared the tape  (pre crossbars let alone nets!).
Despite a combined presence of 14 attacking players and only 3 defenders, the game ended nil nil. It would be another 98 years before the two sides would produce a goalless draw.