The centenary of football in Luxembourg 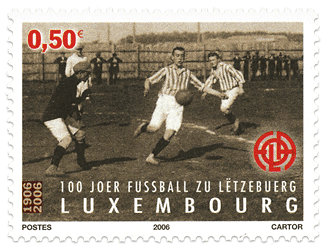 The centenary of football in Luxembourg was celebrated in 2006- the anniversary of the foundation of the first organised football club.

In 1889 a certain Henri Baclesse introduced the game to the Grand Duchy (having been on a trip to Britain). The first organised club came about in a similar fashion. Jean Roeder was a professor of English at the Lycée de l’Industrie et du Commerce of Esch-sur-Alzette, in 1890 he had traveled to Britain to study, and had remained there for 11 years.On his return to Luxembourg he was keen to sharte his passion for football. He met with familiar obstacles- accusations that the game was dangerous, lack of facilitues, intollerance on the part of the authorites. However, Roeder's enthusiasm overcame these difficulties and led ultimately to the foundation on 9 December 1906 of the Football and Lawtennis Club, known as FOLA.
Football caught on and by 1908 there were 14 clubs in Luxembourg and The Luxembourg Football Federation was formed.
In 1909-10 the first national championship was held. 14 teams (including some reserve squads) entered, 9 of which appear in the final rankings.

The championship was decided in a play off:

FOLA did not enter the championship until 1914-15.