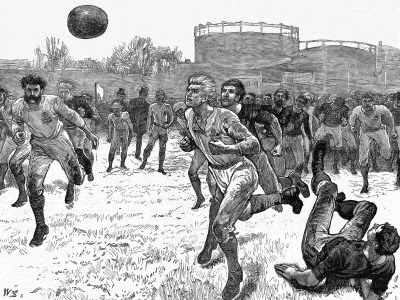 This illustration appears in many soccer history books, but  the roses on the jerseys tell us it is in fact a Rugby match- England vs Scotland at the Oval, 1872.

In the early days, of course, an interest and proficiency in more than one code was unsurprising.  The rules of engagement were often a mishmash and would change from week to week according to the opposition and the mutual agreement of the captains. This, of course, was the very situation that the Football Association set out to counter.

The very first encounter played under the 1863 rules was between two clubs, Barnes and Richmond, who later decided to follow the Rugby Union route.
Several of the northern clubs converted (no pun intended) from Rugby to Association (notably Preston North End, Burnley and Manningham). Clapham Rovers alternated- Association one week, Rugby the next.

Some individuals excelled in both codes. Here are just a few examples:

Robert Barker kept goal for England during much of the first ever international match. In the absence of the preferred goalkeeper he was chosen due to his Rugby experience.

Henry Renny-Tailyour of the Royal Engineers represented Scotland (as a forward) in the second ever international Rugby Union match at the Oval in 1872. In fact it is on record that he was unavailable for subsequent Association matches due to an injury sustained in this match. In 1873 he played in the second international football match for Scotland, against England, again at the Oval, getting onto the score sheet. Scotland lost both these matches.  Renny-Tailyour won the FA Cup with Royal Engineers at the third attempt in 1875.

Reg Birkett was the scorer of the first try in international Rugby- for England vs Scotland in 1871. A dual-coder with Clapham Rovers, Birkett was on the original RFU committee and played for England 4 times.
Birkett was also an FA Cup winner with Rovers in 1880, his second Cup-Final appearance.
He kept goal for England in their 1879 5-4 win over Scotland at the Oval.

Dr. John Smith- as an Association player Dr Smith played in both the English and Scottish FA Cup finals. He was the first man to score 3 goals in  a Scottish Cup Final. He represented his country 10 times (1877-84), scoring 10 goals. His clubs were  Mauchline, Edinburgh University and Queen's Park. His football career was ended by the stringent anti professionalism laws of the Scottish FA (the Dr played as an amateur for Corinthians in a match against a team that included a professional, enough to get him banned!)
Playing Rugby for Edinburgh University, in 1888 Dr Smith was selected for the British Isles antipodean tour. 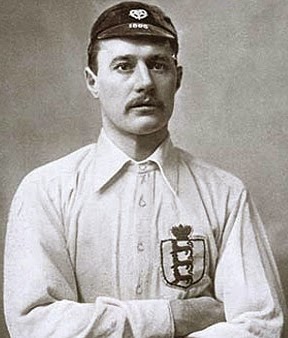 John Willie Sutcliffe - Rugby in the north of England was blighted by witch hunts against professionalism. In 1889  Sutcliffe represented England against New Zealand Natives, but later that year, his club, Heckmondwike, were thrown out of the RFU for professionalism.
Remarkably, Sutcliffe was then able to join Bolton Wanderers. His original role in Association had been as a forward, but he switched to goalkeeper and went on to make over 300 League appearances for Bolton before joining firstly Millwall Athletic and then Manchester United. In 1905 Sutcliffe joined Plymouth Argyle, for whom he made a further 200 plus League appearances. He ended his playing
days at Southend, having been 24 years in professional soccer. He later went to the Netherlands and managed Vitesse Arnhem.
Sutcliffe was capped 5 times by England (1893–1903) as a goalkeeper. 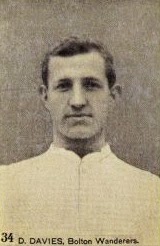 Dai Davies was a half back with Llanelli. He joined Northern Union side Swinton in 1899. In the summer of 1902 Davies, who had only ever seen one soccer match and never played the game before, joined Bolton Wanderers as a goalkeeper (maybe Wanderers were inspired by the precedent of  Sutcliffe). He was a notoriously courageous 'keeper. He played in the 1904 FA Cup Final (completing an unique double, having played in the 1900 Northern Union Challenge Cup Final).
Davies spent 8 years at Bolton and was capped 3 times by Wales. He returned to Northern Union in 1910.