It's like something from a landscape of dreams- a Lancashire League side playing in a stadium capable of holding 80,000 in the shadow of  a 173 m tower... 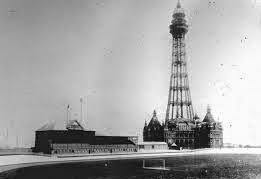 New Brighton Tower was the tallest structure in England. It was built as New Brighton emerged as a popular resort in the 1890s. As a means of further income generation the company responsible, The Tower and Recreation Company, also built a multi sport stadium called the Tower Athletic Ground. The Tower and Recreation Company was a consortium of primarily Manchester based businessmen. They speculated that the football stadium would generate a great income. All they needed was a team.
New Brighton Tower FC was assembled in 1897 and was admitted to the Lancashire League. Having won the Lancashie League in their fist season the club were elected to the newly expanded Division 2 for the 1898-99 season.


Sam Raybould  featured for Tower in 1899-1900, bagging 10 goals in 13 appearances, leading to Tom Watson signing him for Liverpool.


The club also employed the services of proven stars such as Scotsmen Jack Bell (Everton), Bob Petrie (Gainsborough Trinity, The Wednesday, Southampton), and England international Alf Milward (who had made 200+ appearances for Everton).
Another former Evertonian to serve was the splendidly named Welsh international Smart Arridge.
As can be seen from their League positions, it wasn't results that were a problem for Tower, but finances. It wasn't a case of build and they will come- the ground capable of holding 80,000 attracted numbers in the region of  2-3,000.
A visit of Manchester City drew a gate of 10,000, otherwise attendances were nowhere near those of their Merseyside neighbours. During the 3 seasons that New Brighton Tower were in the Football League Everton and Liverpool were established in the top half of the first division, with Liverpool winning the title in the year that New Brighton Tower disbanded.