The German Tourists of 1896

In the 1890s it was not uncommon for British clubs to venture to the continent, but it was pretty much one way traffic. Whereas clubs abroad were keen to learn from the sometimes gruelling experience of hosting English or Scottish guests (even lowly English clubs were a head and shoulders above the continentals- as late as 1913 Reading could thrash the best teams in Italy and West Norwood  beat Ajax) there was not much incentive for British clubs  in hosting visitors who would provide neither serious opposition or a healthy gate.

In 1896 a German team visited England, said by the press to represent the 'German Football Association'. The Deutscher Fußball-Bund didn't come into being until 1900, and I am not sure who was actually responsible for arranging the tour.  They were a weak side, and the British press were frank in describing their deficiencies. The Scottish FA were at the time considering an international against Germany, and during the tour the President of the SFA was keen to emphasise that the present tourists were not representative of The German League (sic): 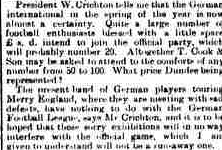 Mr Crichton's hopes that these sorry exhibitions would not interfere with the official game were sadly never tested, as the proposed visit to Germany by Scotland never materialized.
During the tour the Germans played 3 Southern League teams and an amateur selection under the name of Crystal Palace (not the present Palace or the original club, but a scratch team made up primarily of members of Corinthian FC).

The Germans arrived at Queensborough on Tuesday September 1st having sailed from Flushing. 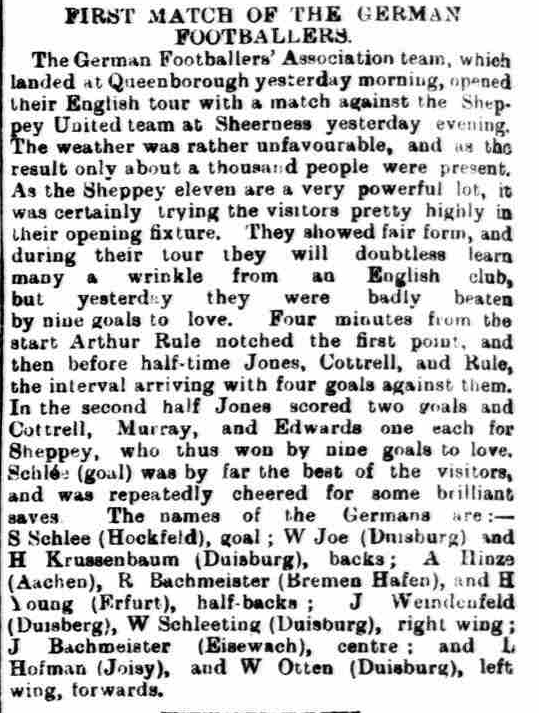 Yorkshire Herald 02.09.96
01.09.96 Sheppey United 9 Germans 0
The Germans played their first match on the evening of their arrival- and that combined with the poor weather conditions might have been considered a factor in their poor showing against their Southern League opponents at Sheerness.

02.09.96 Chatham 15 Germans 0
The Evening Telegraph remarked on how the Germans were beaten even more easily than at Sheerness.Chatham were 9 up at half time.


The Edinburgh Evening News commented of the tourists It is about time they were going home. 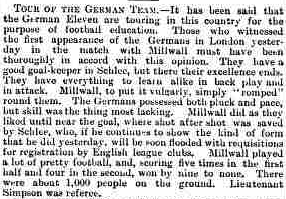 Herr Schlee must have been quite a goalkeeper- scathing criticism of the other 10 though...
Prior to the Palace game the London Standard remarked it is a great pity that those who had the arrangements of the tour in hand did not fix matches for the visitors against weaker clubs. As it is, so far, the germans have been so badly beaten as to greatly discourage them from paying another visit for some time to come.

05.09.96 Crystal Palace 13 Germans 0
Played at the Crystal Palace ground the hosts were a strong amateur side featuring many Corinthians. These included England internationals Charles Wreford-Brown, G.O. Smith (who scored 6) and Hugh Stanborough (4).
The press reported very little interest in the game on account of the poor form the Germans had shown in their previous matches.

The Germans - it appears that only eleven players traveled, which is in itself a bold undertaking when playing 4 matches in 5 days- were:

The party left Britain the evening of the Crystal Palace game. In 5 dys they had played 4 matches and conceded 46 goals.