In January 1879 the Lancashire FA selected its first representative team. North Wales were invited to play at Darwen.
In the 19th century North Wales equaled Wales in football terms. South Wales was still very much a Rugby loving area. Association football in Wales was concentrated in Denbighshire, Montgomreyshire, Flintshire, Wrexham and the borders of Shropshire.
This was  a time when northern players were only beginning to be rewarded with England caps - North Wales, however, had 10 internationals on show.
Hargreaves scored Lancashire's goal with a header from a Tootil corner. North Wales equalised when Heywood shot from 20 yards (a remarkable thing judging by the reporting) and Doctor Greenwood collided with the goalkeeper, allowing the ball 'to slowly roll between the posts' .
2000 spectators were present at Darwen Cricket Ground , where the pitch was snow covered. 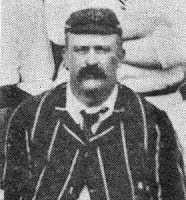 Doctor Greenwood- he was a member of a cotton manufacturing family (in 1881 the family company employed 280 workers). Doctor was his given name. He later won 2 England caps (he was 18 years old when this match was played).