The earliest expressions of cross-border football rivalry date from 1872, with Queen's Park playing Wanderers at the Oval. This of course was also the year that the officially recognised international matches between Scotland and England began. The next club match was not until  January 1875 when Queen's Park took on Notts County.


An important addition to this scheme of things came in the form of the Sheffield v Glasgow series of games, the first of which took place at Bramall Lane on March 14th 1874. The early matches at Sheffield were played under the Sheffield Rules (unification of the FA and Sheffield Rules occurred in  1877) and those in Glasgow under the rules of the Scottish Football Association.
Reading the local press of the day Sheffield clearly had a very vibrant football culture, with numerous matches and with some clubs fielding 3 XIs. The local newspapers were also keen to point out the distinction between  the Sheffield team we are looking at here (the representative side drawn from the whole of the Sheffield FA) and Sheffield FC (who played the 1866 match against the FA).
In using  newspaper archives in order to try and establish  the clubs from which the Sheffield team was drawn I found that some of the players appeared for different club sides from week to week . In some cases I was unable to establish club affiliation. 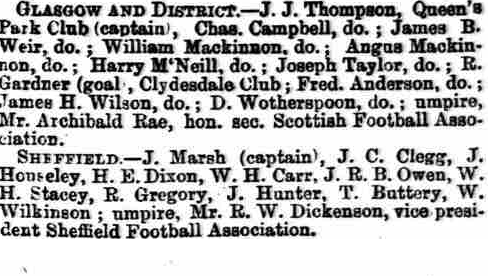 The Sheffield Telegraph correspondent was a little apologetic at the inclusion of Mr Wylie as he was from Shropshire, therefore not a bona fide Sheffield man, although he played for a club affiliated to the Sheffield Association. Also the Sheffield team, being selected by election , was flawed in that 2 goalkeepers were selected and  the popular John Marsh excluded. Marsh eventually played in place of the absentee Owen
!0,000 were in attendance.
Sheffield, it is recorded, hit the tape on a few occasions.  McLiesh scored glasgow's first after half an hour, his shot taking what sounds like a wicked deflection off Wilkinson- Miller added a second 5 mins from time.
The report includes an account of throngs of spectators lining the route as the Sheffield team returned home.

Again Sheffield Rules were played .
The press quoted odds of 5-4 on for Glasgow before the game.
6000 were  at Bramall Lane in wet conditions. The Telegraph comments on the lithe and wiry physique of the Scots and on their showing fine concerted play in contrast to the individualistic approach of Sheffield. There is reference to the bar (instead of the tape), and ends were changed at 45 minutes rather than after a goal. Andrews opened the scoring in the 20th minute.
Glasgow's second goal came when goalkeeper Carr tried to make a quick throw out but hit Andrews on the legs, the ball rebounding into the goal.
The usually partisan Sheffield press admitted that their team was outplayed both 'in speed and tactics'.

It is recorded that Sheffield played a 2-2-6 fornation. The Scots were described as a wonderfully fast, hardy, astute and wiry team.
P Andrews had moved to Leeds and it was noted that Lang was surprisingly overlooked by Sheffield, having moved there (ostensibly to work in a cutlery factory, in fact he was paid to play for Wednesday).
Wilkinson sustained an injury whilst cutting the bread at breakfast on the day of the game
it was noted that glasgow practiced together weeks preperation.
The goal came in the 5th minute when Carr palmed a corner kick from Hunter into his own goal

The seriousness with which Glasgow approached this fixture is revealed in the fact that 60 players from 15 clubs took part in trials before the team was selected.
Sheffield were now criticised by their own press for passing too much! A more direct style was urged.
Glasgow's opener was possibly a phantom goal by one of the McNeil brothers.
After 20 minutes Britten added a second after a long run and a flying kick .
Campbell scored Glasgow's third.
Cursham pulled one back with a header from a corner (off his occiput, the report says).
In the 2nd half Cursham narrowed the deficit further with a slick shot.
M Mcneill  completed the scoring, a header from a cross provided by his brother.

Glasgow 4 Sheffield 1*
First Hampden
15.02.79
att:6000
Sheffield played in scarlet- Glasgow, as ever, in blue jerseys with white knickers.
The straight throw in rule was used.
Sheffield again played in a passing style that was noted to be unusual for English sides
A corner kick from Clegg knocked the crossbar off but no goal
On 25 minutes H Cursham headed in off the underside of the bar.
20 minutes after the break Richmond sent the leather flying between the timber for Glasgow's equaliser
15 mins from time Richmond's deflected shot put Glasgow 2-1 up. McNeil and Kerr finished Sheffield off in the closing stages.