The Scottish League continued in a revised form during the 1914-18 war.
On the afternoon of April 15th 1916, Celtic beat Raith Rovers 6-0 at Celtic Park.
Meanwhile at Fir Park Motherwell drew 1-1 with Ayr United.
That evening a second game was played at Fir Park. This time Celtic were the visitors, and they beat Motherwell 3-1.
Celtic thus secured a record 13th league Championship and in doing so set the record for most goals scored in a season. Their record was:

The press commended Celtic for the way in which they had been prepared to play the re arranged Motherwell fixture rather than exploit the commercial potential of extending the season. They were also praised for having avoided midweek fixtures that could have had a negative effect on the war effort by causing absenteeism from industries.

The Celtic team that turned out in the evening match had only one change from the afternoon game -Joe O’Kane, who had scored 2 against Raith Rovers, gave way to Trooper Joe Cassidy, who had missed the Raith game having arrived late from Perth barracks where he was serving in the army. The other ten were: 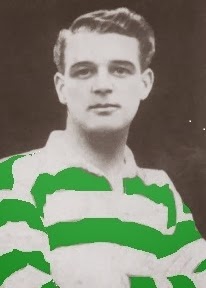