Gone but not forgotten - Loughborough Athletic and Football Club

Loughborough Athletic and Football Club, frequently, erroneously, referred to as Loughborough Town, graduated to the League from The Midland League.
Their 5 seasons in the League were undistinguished, other than by the fact that they were punished with ground closure for crowd trouble 3 times!  The grand finale came in 1899-1900- 18 goals for and 100 against, 1 win, 6 draws and 27 defeats (including all of their away games) giving a total of 8 points out of a possible 68. This is the joint lowest ever points total.


The club colours were black and white stripes.
Accounts of the final season tell of financial worries and public indifference, the background against which they enjoyed a 2-1 win over Burton Swifts on January 6th. 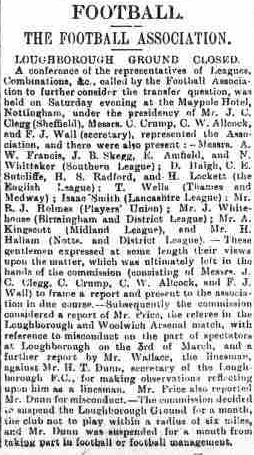 Between the home game from which the complaint arose and the  ground closure being announced Loughborough had played the return match with Woolwich Arsenal at the Manor Ground and lost 12-0.