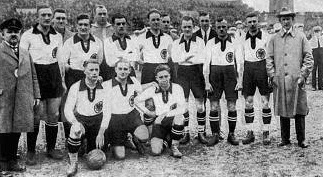 The textbook of coaching that was the cornerstone of the development of football-thought in pre war Germany was Fußball. Theorie, Technik, Taktik by Richard Girulatis.
The book was the source of Sepp Herbergers oft quoted dictum Elf Freunde müsst ihr sein, wenn ihr Siege wollt erringen...(you must be 11 friends to win your victories)*

In the 1920s two dominant rival forces from the south arose in German football- 1. FC Nürnberg and SpVgg.Fürth. Rivalry between the two clubs (the cities are just 8 km apart) was intense. There is a story of a player who had to leave SpVgg after he married a Nuremberg girl.

The strength of the neighbours gave rise to a situation whereby a German team selected to face the Netherlands in Amsterdam on 21.04.1924 was made up entirely of Nürnberg and Fürth players.
Elf Freunde? No way!
The 2 rival factions that made up the national team traveled to Amsterdam in separate railway carriages, eating and sleeping as 2 distinct parties.
On the field things were no better. When  Karl Auer got Germany's goal in the 14th minute the 1. FC players did not celebrate or congratulate him.

* Claims that the statement appeared on the original Viktoria trophy appear to be inaccurate.