He Banged The Leather For Goal

I'm pretty sure that neither Charles Darwin nor Florence Nightingale had much interest in football. So here's one for your pub quiz. Who is the only football fan to appear on an British banknote? Bonus- what team did he support? 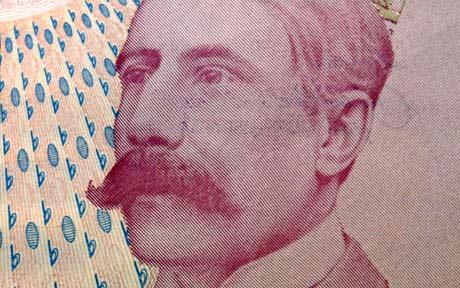 Most of you probably know that it was Sir Edward Elgar, arguably the greatest British composer and a supporter of Wolverhampton Wanderers.  Elgar celebrated his enthusiasm for Wanderers in a piece of music.
Elgar first went to see Wolves playing in the company of a local girl, Dora Penny, with whom he developed quite an attachment. He would later cycle the 70 km from Malvern to Wolverhampton to accompany her to Molineux. She recalled:

It all delighted him.
The dense crowd flowing down the road like a river; the roar of welcome as the rival teams came on to the ground; the shouts of men calling to their player-friends by their Christian names – usually considerably shortened; the staccato ‘Aw!’ at a mishap (a most remarkable sound from a crowd of 60,000); and the deafening roar that greeted a goal.
Mrs Richard Powell (nee Dora Penny) Edward Elgar: Memories of a Variation
According to Dora this first game was a Birmingham League match between Wolves and Singers FC (later Coventry City) so her memory or estimate of a 60,000 crowd is a bit amiss.

In February 1898 Wolves beat Stoke 4-2 in a Football League fixture. At Elgar’s request, Dora sent him a local press report of the match. The report, in covering a move involving Billy Malpass, used the phrase 'he banged the leather for goal'. Victorian writers frequently employed terms such as 'the leather'  'the globe' or 'the sphere' when writing about the ball.  This phrase captured Elgar's imagination, and he set it to music. The 'score' was included in a letter he sent to Dora in March 1898. 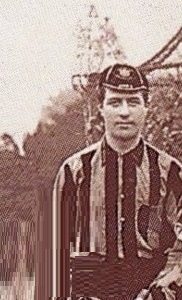 Billy Malpass played at right back in the Stoke match, though he was generally a center half.
Born in  Wednesbury, he  was a one club man,  joining  Wolverhampton Wanderers  in 1891. He was in the Cup winning XI in 1893 and was captain of the side that lost in the 1896 final. Malpass  made 155 appearances for Wolves and scored 9 goals. His career was ended by a knee injury in 1899.