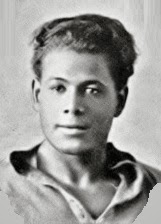 After Andrew Watson's final appearance for Scotland in 1882 it was another 49 years before a black player appeared for one of the British national sides.
Eddie Parris played for Wales in a 4-0 defeat against Ireland in Belfast on 05.12.1931. It was his only international appearance.
Bradford Park Avenue signed winger Parris as a 17 year old from his local club Chepstow Town in 1928. Parris was born in Monmouthshire; his father was Jamaican (possibly born in Canada).
He later joined Bournemouth (summer 1934), Luton Town (February 1937) and Northampton Town (November 1937).