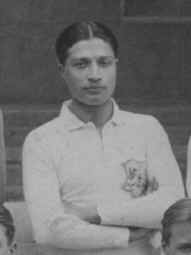 Cairo born Hussein Hegazi came to London as a 19 year old in the summer of 1911 to study Engineering at the University College London.
He played for Dulwich Hamlet and was soon picked up by Division 2 side Fulham. Hegazi scored  for Fulham against Stockport County on 11.11.11 in what turned out to be his sole appearance for the Craven Cottage club. He felt a sense of loyalty to Dulwich Hamlet, but his situation had also fired a debate on the 'poaching' of players by professional clubs.
Hegazi represented the London FA on 5 occasions.
Hegazi was particularly busy during the spring of 1912 -  in March University College London traveled to Prague, where they were beaten 6-0 and 5-1 by Slavia Prague in successive days . UCL must have grown tired of the sight of Slavia players, as 7 of them also turned out for Bohemian Universities in a game that was drawn 2-2 .
On the return journey Hegazi scored a hat trick as Olympique Lillois were beaten 3-0.
In April 1912 he toured Netherlands, playing for Hamlet against Sparta Rotterdam and Hercules Utrecht.
Having won his Cambridge Blue in a 2-1 victory over Oxford, Hegazi returned to Egypt in 1914, initially joining Sekka before moving to Al Ahly. After 8 seasons at Al Ahly he transferred to Zamalek.
He played for Egypt in the 1920, 1924 and 1928 Olympics as Africa entered the arena of International football.


I am indebted to the work of  Dr Tarek Said and Mr. Jack McInroy.