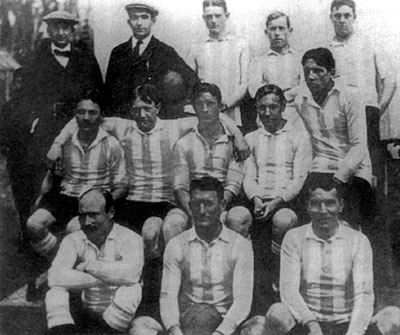 One of the iconic images in the world of football has to be the sky blue and white striped jersey of Argentina. The Albiceleste was not introduced until Argentina's 9th international match on 13th September 1908.
This Copa Newton  game against Uruguay at Cancha de Gimnasia y Esgrima, Buenos Aires ended in a 2-1 victory despite the fact that Ernesto Brown went off injured in the first half. Argentina's second goal was their first succesful penalty in internationals, scored by Arnoldo Watson Hutton.