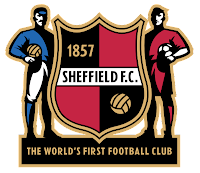 I don't want to get too drawn into writing about the prehistory of Association football, but it would be unthinkable to overlook the Sheffield Rules, which predated Association and thrived alongside it in the 1860s.
Sheffield FC were present at early FA meetings and subsequently joined the FA in December 1863 , but they didn't adopt the FA rules fully until 1877. In the interim there was a certain amount of cross pollination and horse trading between the Sheffield Club and the FA that gave Association Football many characteristics both in terms of rules and execution that persist to this day. Of the twelve changes that were made to the FA rules in the 1860s eight originated in the Sheffield Rules. During this period Sheffield Rules was the dominant form of football in the north of England and the midlands. The influence of the FA was concentrated around London.

Time- the concept of a game of 90 minutes and a half time break both came from the Sheffield Rules.
Goals- Sheffield goals were initially only 4 yards wide, which unsurprisingly meant a lot of low scoring matches. However, Sheffield introduced the cross bar.
Handling-  Until 1867 Sheffield permitted touching the ball but not catching or running with it.
Corner kicks- adopted by the FA in 1872, Sheffield introduced corner kicks in 1867.*
Free kicks- free kicks for foul play originate in the Sheffield Rules. Sheffield had proposed the introduction of penalty licks for fouls within 2 yards of goal in 1872, but the FA rejected it.
Offside- initially there was no offside in Sheffield Rules. When they did adopt an offside rule it was a more lax version (similar to Queen's Park's) requiring only one defender to be between the attacker and the goal, rather than the three favoured by the FA.  Sheffield conceded to the FA on this matter, adopting the stricter rule.
Throw ins- according to FA rules the ball could be thrown in in any manner, but it had to travel at a right angle to the touch line like a Rugby throw in. Sheffield allowed the throw to be made in any direction  but it had to be thrown two handed and overhead- like the modern football throw in. Sheffield also introduced the convention of the throw in being awarded against the team who put the ball out of play, rather than the throw being taken by the first player to touch the ball down after it crossed the touchline.
Physical contact- Sheffield Rules were laxer on this- pushing an opponent was permitted, whereas it was proscribed by the FA 1863 laws.

Tactics, formations and technique- Sheffield teams generally played a 2-2-5-1 formation- the lone forward not being so hampered by offside law staying up field to chase 'kick throughs'.
Sheffield teams were noted for their 'combination play' involving moving the ball by inter passing.
They also provided some novelty value with the development of aerial passing and heading the ball.
Another art that seems to have it's origins in the north was 'corkscrew play'- the practice of curling the ball.


In 1866 Sheffield F.C. requested a match with an FA club. The FA picked a select team and the two met on  31st March 1866 at Battersea Park. The fact that the FA side won by two goals and four touchdowns to nil show that the rules being used at the time had , albeit briefly, adopted the Sheffield idea of 'rouges'. The two associations  played 16 inter-association matches under differing rules; the Sheffield Rules, the London Rules and Mixed Rules before Sheffield joined the FA fold completely in 1877, by which time the FA's Laws of the Game had a distinctly Sheffield flavour.

*Previously they had had a system of scoring by touchdowns. There were flags four yards each side of the goal and if the ball was touched down in this area a 'rouge' was recorded. These 'rouges' were used to settle drawn games.