On the 6th March 1926 Swansea Town hosted Arsenal in the sixth round proper (Quarter finals) of the FA Cup.

Click on the picture to view a newsreel of the game.

At the time Town were enjoying their most successful season to date, having joined the league in 1920 and been promoted from the Third Division South as champions the previous season. They were 4th in Div 2 (they finished 5th).
Arsenal were 3rd in Division 1, they would finish 2nd behind Huddersfield Town and were, at this stage, favourites to win the FA Cup.
Swansea entered at the FA Cup at the first round proper and progressed with wins over Exeter City (away), Watford (home), Blackpool (away), Stoke (home) and Millwall (away).
Arsenal had begun in the third round proper, Beating Wolverhampton Wanderers at home in a replay after a draw at Molineux. In the fourth round they beat Blackburn Rovers (home) and then drew with Aston Villa away before winning the replay at home. 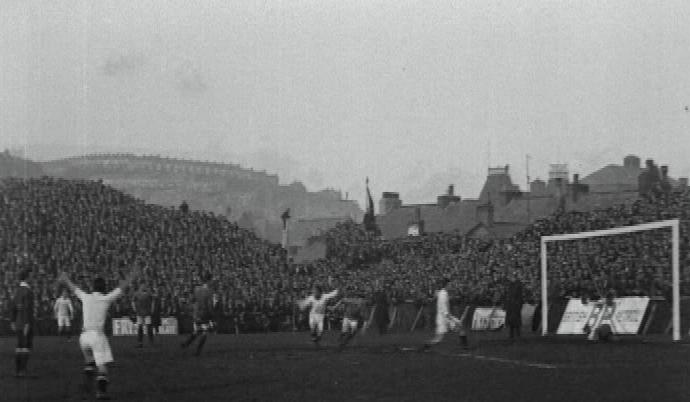 Len Thompson puts The Swans in front in the 44th minute at the Town End of the ground.

A gate of 25,198 crowded into The Vetch Field to witness Swansea pulling off a major suprise by beating the visitors 2-1.
Len Thompson put Swansea ahead in the 44th minute.
Having gone two up through favourite Jack Fowler Swansea resisted a lot of late pressure, with Denoon making a good save from Paterson and Buchan also having a good chance for the Gunners. Mackie scored from his own half late on but Swansea held out.

The line ups were:
Swansea Town:

Goal:       Jock Denoon
Jock Denoon joined the Swans in 1919. he had been a police officer before becoming a professional. He began his career with his hometown club, Inverness Thistle, and had spells at Chelsea and Norwich (not making the first team at either). He remained at The Vetch until 1927, making a total of 204 first team appearances.

Fullbacks: Sam Langford
Swansea bought the Tipton born right back off Merthyr Town in 1923 for half of the £1500 asking price, capitalizing on Merthyr's financial hardship.  He spent 4 years at Swansea and later played for Charlton Athletic and Walsall, where injury prevented him in playing in another famous FA Cup defeat of Arsenal!

Wilf Milne
Wilfie Milne was playing for Walker Celtic (Newcastle) when Swansea beat Manchester United and West Ham United to sign him for the price of a fish and chip dinner and a cup of tea (2 shillings and ninepence) in 1920.  He spent 17 seasons at The Vetch, making a total of 586 league appearances, still a club record. He scored his first goal in his 501st match!

Halfbacks:Jimmy Collins
Dundee born Collins signed for the Swans whilst he was in the army and spent ten years at the club. He later coached in South Africa.
Joe Sykes
Signed from The Wednesday in the summer of 1924, Sykes made 312 league appearances over 11 seasons.
Lacky McPherson
Glaswegian McPherson played for Cambuslang before joining Notts County. He joined Swansea in 1924 and was sold to Everon for £6000 in 1930, having made 199 league appearances.

Forwards: Billy Hole
Swansea born Billy Hole was with Swansea Town in their Southern League days, signing in 1919. In 11 seasons at The Vetch he made 341 league appearances. Hole represented Wales 9 times.  He had 3 sons who also played for the club.
Harry Deacon
Joined Swansea Town in 1922 after spells with The Wednesday and Birmingham. Made 319 league appearances in his 9 seasons at Swansea.
Jack Fowler
Cardiff born Fowler was Swansea's record signing when he joined from Plymouth Argyle for £1,280 in 1923. In 7 seasons at Swansea he made 167 league appearances and scored 102 goals. He won 6 Welsh international caps.
Len Thompson
Yorkshireman Thompson joined Swansea from Birmingham in June 1922 for a fee of £100. He spent 6 seasons with the club and was then sold to Arsenal for £4000, but was displaced from their first XI by Alex James.
Dai Nicholas
Aberdare born Dai Nicholas was in his second spell with Town. He first joined from the Royal Navy as an amateur in 1919 and went on to Merthyr, Stoke and Aberdare Athletic before returning to the Vetch in 1924. Capped 3 times for Wales he made 151 league appearances in his 6 year second stint at Swansea.

The Swans were rewarded with a semi final against Bolton Wanderers that they lost 3-0 at White Hart Lane.