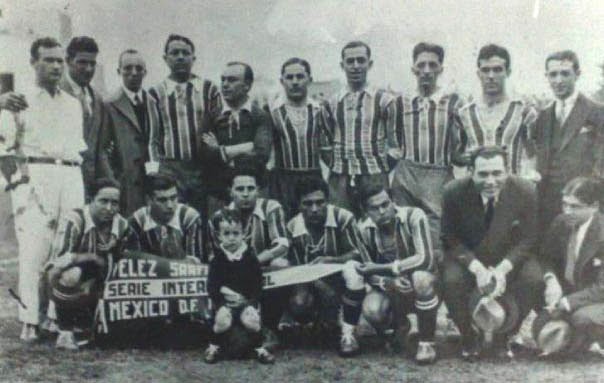 The tourists in Mexico - the familiar V strip was adopted in In 1933, the jerseys shown here were the original red, white and green stripes.

It was quite an undertaking.
Boca Juniors had toured Europe for 4 months in 1925. In 1930 Vélez Sarsfield embarked on a tour of the Americas that occupied 6 months.With a budget of 10,000 pesos and a daily allowance of 250 pesos per man, the party traveled up the west coast of South America, through the Panama canal to Mexico, Cuba and the USA before retracing their route.
Vélez Sarsfield had finished 15th in the huge 36 team Primera División of 1930. It was a transitional period in Argentine football- the next domestic season saw the introduction of professionalism, Vélez finishing 9th in an 18 team division. (Boca Juniors were champions on both occasions).
The tour party was made up of the following players:

The guests were a distinguished group - Paternoster and Varallo had played in a World Cup Final.
Varallo recalled the long sea voyage:
We’d train on the ship, and got so used to it that when we were on the ground, it seemed like everything around was still moving!
Bernabé Ferreyra couldn't stop scoring  wherever he played. On this tour he averaged more than a goal a game. The following year he joined River Plate , becoming the World's most expensive player, the astronomical fee remaining unbeaten for 20 years. 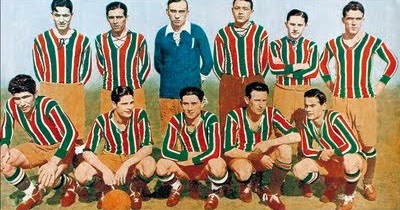