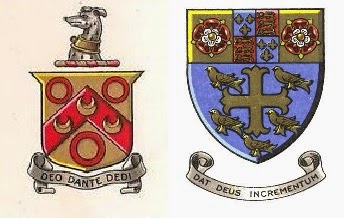 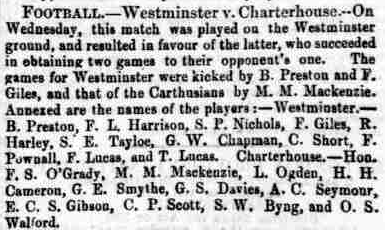 It would appear that the writer of the above report hadn't grasped the terminology of the game. 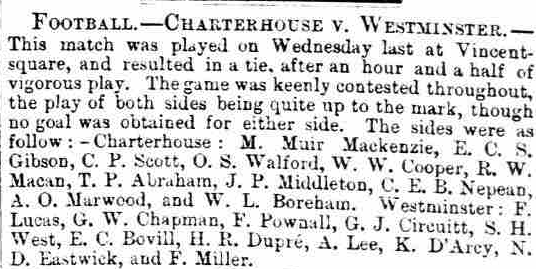 Charterhouse and Westminster were 2 of the 'public' schools in which Association Football was the winter game of choice. In fact the Association rules and modes of play owed much to the brands of football played at these schools before the 1863 rules were drafted. The first ever inter-school match under Association rules was between Charterhouse and Westminster.
Some 20 years after the above matches were played the 'old boys' of each school had formed prominent clubs which supplied England with a number of internationals, and in the case of Charterhouse,won the FA Cup in 1880-81.
Both schools followed rules that allowed passing forward. The Football Association adopted this in 1867 , a key move in the creation of the game that we have today, opening up the possibilities for strategic interpassing rather than the headlong rushes that resulted from a rule whereby, as in Rugby, anyone in front of the ball was 'off his side'.

As you would imagine, with the scholars of both institutions being drawn from the upper echelons of Victorian society, there are a number of noteworthy names in the team lists. In footballing terms there are Charles Nepean (aged  14) and Montague Muir Mackenzie (18), both of whom featured in the Alcock Internationals of 1870-72 (representing Scotland). Nepean was an FA Cup winner with Oxford University in 1874. Photographs of these young men are scarce, however, here is H.H Cameron (Charterhouse, 1864). 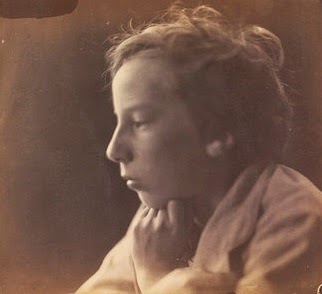 Born in 1852, he was the son of of the pioneering photographer Julia Margaret Cameron.