When the Football League was founded in 1888 it is remarkable that, despite the ascendancy of Lancashire football,  there was no side from Manchester itself in a suitably advanced state of development to be considered for inclusion in the venture. Newton Heath played in the Combination (1888–89) and the Alliance (3 seasons from 1889)  before being elected to Division 1 of the Football League for the 1892-93 season.
The club became a Limited Company (shares £1) in June 1892. Alf Albut became the first full time club secretary and a number of new signings were secured (including 8 Scotsmen).
The Heathens first league fixture was away to Blackburn Rovers at Ewood Park on September 3rd 1892. Rather inauspiciously the kick off was delayed until 4pm because Newton Heath arrived late.
Within 10 minutes of the kick off they were 2 goals down. Southworth shot Rovers into the lead, the second goal, credited to Hall , came from a scrimmage. Rovers went 3 up before Donaldson pulled one back (histories credit Coupar with Newton Heath's first league goal, but contemporary newspaper reports identify Donaldson as the scorer). Coupar then added another from a scrimmage before half time.

The Manchester Courier and Lancashire General Advertiser reported a closely contested match: for three fourths of the game there was nothing to chose between the two teams- backwards and forwards the tussle went- both goals being visited in alternation.

Chippendale put Rovers 4-2 up before the prolific Farman brought the Heathens back to within 1 goal.  Incidentally, whereas green and gold are associated with Newton Heath, largely due to the
1992/93 revival kit , the first team colours in the 1892-93 season were red and white 'halves' (more correctly 'quarters'). 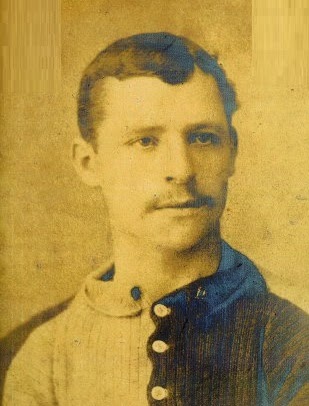 Warner
Goal keeper: Jimmy Warner
27 year old Warner, born in Lozells in Birmingham, had spent the first 4 seasons of league football as Aston Villa’s keeper. The previous April he had felt the wrath of Villa supporters after the FA Cup final defeat to neighbours West Bromwich Albion. The windows of his pub (Old College Inn, Spring Hill) had been smashed by angry fans. In 1892 Warner was also involved in a scandal regarding an elopement with a woman (he was married at the time).
He had been an FA Cup winner with Villa in 1887.
His Newton Heath career was virtually ended by his failure to turn up for an away match at Stoke in January 1893. 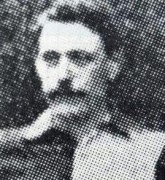 Right back: John Clements
Clements, 24 , was born in Nottinghamshire and had played 2 seasons of league football for Notts County.

Left back- James Brown
I don’t know much about Brown. He only ever made 7 League Appearances and was never on the winning side. 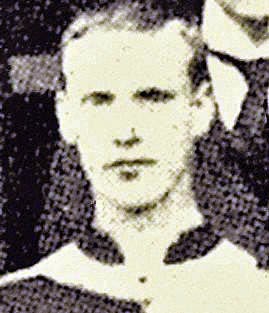 Stewart
Centre half: Willie Stewart
22 year old Stewart was Scottish- a rangy 1.77m. He had played for Newton Heath in the Alliance, mainly as an inside forward. 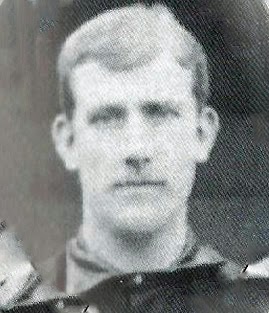 Erentz
Left half: Fred Erentz
Another Scot, 22 yr old Erentz spent 10 seasons with Newton Heath, making over 300 appearances. His last match was Newton Heath's last game before they became Manchester United.  Half Danish , he was signed from Our Boys (Dundee). 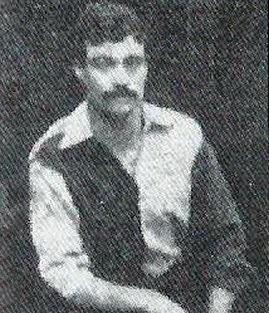 Farman
Outside right: Alf Farman
Farman was signed from Bolton Wanderers in 1889. A native of Birmingham he had been on the books of both Excelsior and Aston Villa.  He scored 53 goals in 121 appearances for Newton Heath.

Inside Right- Jimmy Coupar
Another Scottish import from Our Boys (Dundee).  Coupar returned to Scotland in Jult 1893, joining St Johnstone.

Donaldson
Centre Forward- Bobby Donaldson
Donaldson joined Newton Heath from Blackburn Rovers. He was another Dundee man. He finished the season as top scorer for the club with 16 goals.

Inside left- Adam Carson
A Scotsman signed from Glasgow Thistle in June 1892, Carson was sold to Ardwick in the summer of 1893 having made 13 appearances for the Heathens.

Outside left-William Mathieson
A native of Glasgow signed from Clydesdale in the summer of 1892, Mathieson was at Newton Heath until 1895.

Newton Heath  finished the season in 16th place, and retained Div 1. status by beating Small Heath in a 'test match'.