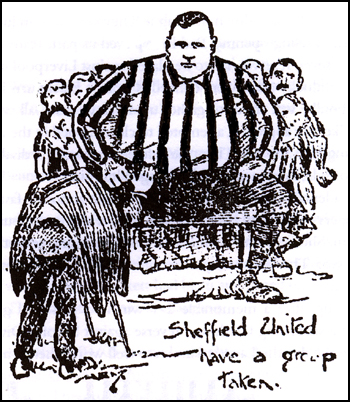 William Foulke appeared in every history of football that I read when I was a boy. He was a kind of symbolic historical shorthand- look how mad football was in those days! A big fat 20 stoner played for England!  There's even a clip of the 1901 FA Cup Final in which Foulke hitches up his trousers like Big Joe Roberts, the Bad Guy in the Buster Keaton movies...
Accounts of Foulke's career  usually focus on anecdotes about his bulk and fiery temper rather than on his achievements on the field.
Let's have a look...
1894–1905- Sheffield United (FA Cup winners 1899,1902, League Champions 1898) 352 appearances
1905–06 Chelsea 35 appearances (Division 2)
1905-07 Bradford City 24 appearances (Division 2)

Derby County's Jack Robinson had won his first cap in England's previous game, and was effectively first choice goalkeeper for the national team until 1901.