Following the October Revolution of 1917 and the conclusion of hostilities between Russia and Germany in March 1918, the Russian Constitution renamed the country the Russian Socialist Federative Soviet Republic.

During 1923 a series of matches was played by a team from the Russian Socialist Federative Soviet Republic. The team was a combined Moscow / Petrograd (St Petersburg) squad. They toured Sweden, Norway, Germany and Estonia, playing 18 matches resulting in 15 wins and 3 draws, with 75 goals scored and 23 conceded.
The hosts and the media in the RSFSR regarded the team as the successors of the Russian national team of 1914. In the countries visited they were seen to represent either the menace of Bolshevism of the triumph of the proletariat  depending on where the commentator stood on the political compass.
Estonia count their match with the RSFSR on 21.9.231 as a full international. Prior to this the RSFSR played 2 matches that have been considered by some historians of the game to be of the same status as full internationals.

Sweden.
A Swedish newspaper associated with the Communist Party, Folkets Dagblad Politiken, initially invited the RSFSR to play one match in Gothenburg. Folkets Dagblad Politiken sought to stimulate interest in the game by extending an open invitation to other clubs that might be interested in playing the RSFSR. A dozen clubs from across Sweden responded and a tour was organised.
Following 9 games undefeated on the tour of Sweden, concern was expressed by both the Swedish media and  the Swedish football authorities that the tour had been a pro Soviet pr excercise organized by communist sympathisers.  Nya Dagligt Allehanda newspaper described the tour as Bolshevik propaganda.
The Swedes were keen to emphasize that the teams that the RSFSR had beaten were not top class. In response, Comrade Medvedev , Chairman of the Committee of Physical Culture and leader of the tour party, wrote to the Swedish Football Union stating that the RSFSR team was prepared to play any side that the Swedish Football Union chose to field.
According to Folkets Dagblad Politiken,Medvedev wrote:  We want to meet with the strongest.
Consequently on 23.08.1923 Moscow / Petrograd played a Team Stockholm. Contemporary posters billed the match as Sweden vs RSFSR. The match was delayed when the 'Soviets' insisted on their red flag being flown, declining to take to the pitch until it was (they made sure they brought at least one with them!). Team Stockholm, although acknowledged by the home press as not being the strongest team available to the selectors, were expected to be too strong for the RSFSR, but the visitors won 2-1. Grigoriev and Butusov were the RSFSR goalscorers.

Norway.
Following the game in Stockholm  the RSFSR moved on to Norway, where having beaten a succession of club sides they faced a selection called Team Club Norway on 30.08.1923. This was a hotly contested match that the visitors won 3-2. The RSFSR scorers were Isakov, Kanunnikov and Butusov.


The RSFSR then traveled on to Germany. Other than the fact that they played  matches in Berlin and Stettin I know nothing of how their exploits there.

Estonia.
On 21.9.231 the RSFSR team played the Estonian national team in Tallinn. The Estonians count this as an official international.  RSFSR won 4-2.  Butusov scored a hattrick and  Isakov scored the other. Kalot got two penalties for Estonia. 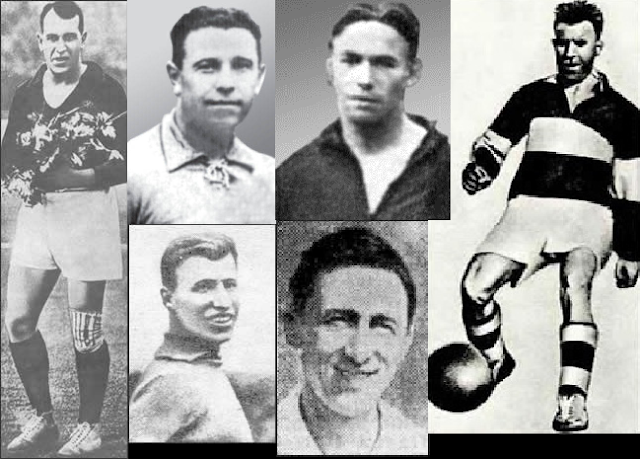 That the games were of an equal status to full internationals could be supported by the following:
1. The teams fielded by Sweden and Norway featured a number of previously capped players.
2.  Given Russia's lowly pre war standing in the football order and the fact that they had not played club teams of 'the first order' during the tour, Sweden and Norway fielded representative sides that should have been equal to the visitors.

3. The RSFSR media and public considered the team sent on tour to be a representative of the RSFSR and the ideals that it represented.
4. Sweden and Norway hesitated to bill their select teams as national sides for fear of FIFA reprisals.

1- there has been conjecture over the date of the game and even as to whether one or two Estonia v RSFSR matches were played.  For confirmation from contemporary sources see http://roonba.20.forumer.com/viewtopic.php?t=2279