There are many reasons to place Arsenal among the very greatest clubs in the history of football.
Under Herbert Chapman and George Allison in the 1930s they enjoyed great success and were always at the forefront of any modernizing initiatives. They were also of course hugely popular. Not only did they draw huge crowds but they were also the default team of the British armed forces.
There is, however, another reason that Arsenal hold such an important place in the heritage of the game . It was Arsenal who brought professional football to London, They risked ostracism to do so, and struggled to carve out a place among the professionals of the north and midlands in the Football League.
Strange then that the beginnings of their league career should remain so steeped in obscurity.
Royal Arsenal were an ambitious club. They sought to compete against the strongest professional sides. They entered the FA Cup for the first time in 1889. In 1891 the club decided to turn professional. In 1893 the club  formed a limited liability company to raise capital to purchase their ground (the Manor Ground, Plumstead). It was at this point that the name was changed to Woolwich Arsenal.
They joined the Football League in 1893. It would be a demanding season- their nearest neighbours were Small Heath about 160 km away. They also faced journeys to Newcastle and Middlesbrough.
The Woolwich Arsenal team was made up of players who had been with Royal Arsenal in the amateur days ans a selection of low-end journeyman professionals.
Lets look at the line up for Woolwich Arsenal's League debut, a 2-2 draw with Newcastle United at the Manor Ground, Plumstead on 02.09.93:

Goalkeeper: Charlie Williams
19 year old Williams was making his league debut. He stayed at Plumstead for one season. He then joined Ardwick. In 8 seasons with Ardwick /Manchester City he made over 200 appearances and became the first goalkeeper to score a League goal from a clearance.

Right back: Joe Powell
The 24 yr old was at Arsenal for 4 seasons, making 91 appearances. A soldier in the
80th Staffordshire Regiment, he played  for the Regiment against Arsenal in 1892 and the club persuaded him to leave the army and join them as a professional. Tragically Powell died at the age of 26 after losing an arm as the result of an infection in an injury sustained in a match against  Kettering.

Left back: William Jeffery
Jeffrey had played 7 league matches with Burnley in 1891-92. He was 27 . He spent one season at Arsenal before joining Southampton St Mary's in the Southern League

Right half: Daniel Devine
Very little is known of Devine: He was Scottish.

Centre half: Bobby Buist
Scotsman Buist, who had played for Cowlairs, and Clyde, was actually a worker at The Royal Arsenal. He played for the club until 1894 when he went back to Scotland and joined Lieth Athletic.

Left half: David Howat
Howat came from Preston and played more than 50 league matches for Arsenal. Not much else is known about him.

Outside right: Duncan Gemmell
Another Scot who drifted into obscurity after making 8 league appearances.

Inside right: James Henderson
Top goalscorer in the first League season. Henderson was Scottish- he had played for Rangers and moved to London as a professional footballer. He left Arsenal in 1895, having played 47 League & Cup matches (30 goals) and  49 other first-team games (30 more goals).

Centre forward: Walter Shaw
Shaw scored the first ever League goal for Arsenal. He was from the  West Midlands and played for Singers and Birmingham St George’s. In 1893-94 Shaw played 17 games and scored 11 goals (plus 4 cup games, 1 goal), the next season he made only 2 first team appearances. He left Arsenal for obscurity in 1895.

Outside left: Charlie Booth
Booth joined Arsenal from Wolverhampton Wanderers. He left in 1894, moving to Loughborough Athletic and Football Club. 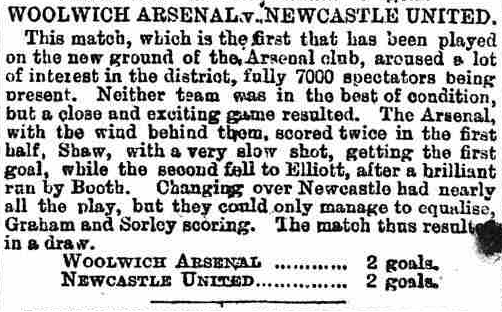