As we have seen elsewhere, Association football had a tough time in the early part of the 1914-18 War, the governing bodies roundly criticised for carrying on with football instead of encouraging players to join up. In December 1914 on the suggestion of Lord Kitchener, Brentford MP  William Joynson-Hicks founded the Football Battalion. Frank Buckley was the first to enlist- he had been a soldier before joining Aston Villa in 1902, and had  represented England against Ireland in February 1914. Commanding the Battalion, Buckley became a Major and was wounded at The Somme. 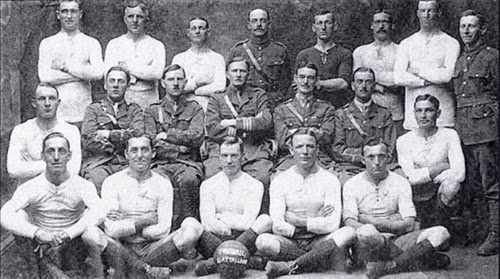