England from the spot...

It is worth remembering that the penalty kick was the brainchild of an Irishman.  Supporters of England in the modern era have every reason to dislike the free kick from eleven metres, but it seems that England's fear of the penalty kick is almost as old as the penalty kick itself.
The first thing that struck me when looking at the stats was the relatively low frequency with which penalties seem to have been awarded in internationals. Only 13 kicks awarded in the 167 internationals that England played between the introduction of the penalty in August 1891 and the summer of 1937, when our coverage of football history ends. 5 goals in 13 attempts represents a 38% success rate. 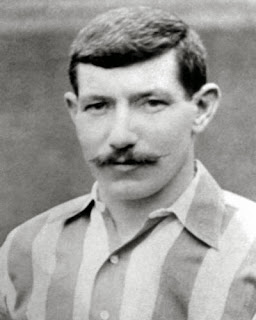