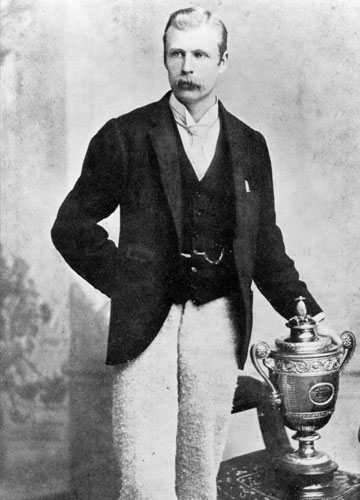 On 11th  April 1885 Ireland took a 2-0 lead against Wales at Belfast's Ulster ground. Ireland's hopes of registering a first international win would have been premature, however, as  Wales  staged something of a comeback, scoring 8 (eight) second half goals. The previous month Scotland had also beaten Ireland by 8-2.
The Ireland team for the Wales match featured Willoughby James Hamilton of the Dublin Association FC. It was his only international appearance, and he played alongside his brother William Drummond Hamilton.

The picture above shows W.J. Hamilton with the Wimbledon Cup. He was the Wimbledon Gentlemen’s Lawn Tennis Singles Champion in 1890, and was ranked (joint) World Number One that year.
As far as I am aware he is the only winner of a major tennis championship to have played international football.