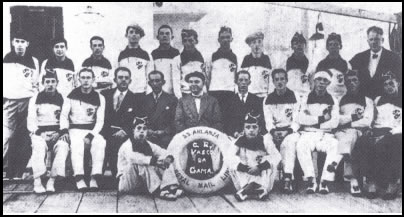 In the northern hemisphere summer of 1931, Vasco da Gama became the first Rio club (and the second from
Brazil) to travel to Europe. Under the management of former  Liverpool player Harry Welfare,  Vasco recruited the assistance of players from Botafogo (Nilo, Carvalho Leite and Benedito) and Fluminense (Fernando) for the 12 match tour of Portugal and Spain.

Aside from Harry Welfare and Russinho there were a few other figures of note involved on the tour:

Jaguaré was stevedore at the port of Rio. A typically eccentric goalkeeper, he delighted crowds but angered opponents and officials with his antics- throwing the ball at the heads of opponents, shouting 'chuta!' to strikers as they bore down on him, catching the ball acrobatically, and even using a bicycle kick to clear his lines. He was known as Dengoso or Araña Negra (The Black Spider).
Jaguaré was offered a lucrative contract (and Spanish citizenship) by Barcelona. Jaguaré declined the offer and returned to Brazil, joining Corinthians. In 1935 however he set out for Italy with Fernando (see below). They decided to avoid Italy due to that country's invasion of Abyssinia, and Jaguaré joined Sporting Lisbon. In 1936 he joined Olympique Marseille, with whom he enjoyed success and cult status.

Having returned to Brazil Jaguaré met a sad end. He died aged 41 after getting into a scrape with the cops (he hit his head). 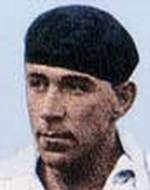 Fluminense's Fernando, who wore a sailor's cap on the pitch, played in the 1930 World Cup . After the tour he stayed in Europe, joining Torino. In Italy he was considered an oriundo. In 1933 Fernando returned to Rio and was actively involved in recruiting South American players to join European clubs.
Fernando himself returned to Europe and played for Sportclub Young Fellows Juventus Zurich (1933-34),  Bordeaux (1934-35), Sporting Lisbon (1935), Real Madrid (1935) and Antibes (1935-37). 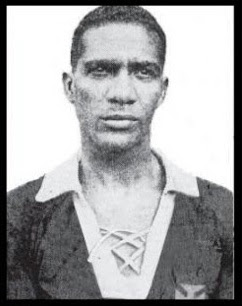 Fausto  was another veteran of the 1930 World Cup who tried his luck in Europe. He also declined an offer from Barcelona, but later played with Sportclub Young Fellows Juventus Zurich (1933).  He was a halfback who delighted in the nickname Maravilha Negra.
Fausto died of Tubercerlosis aged 34.

When thinking of the lucrative professional contracts that these men were offered in Europe it is worth remembering that at the time football in Brazil was an amateur sport.