Chirk is a village between Wrexham and Oswestry close to the England Wales border. In 1891 the population was 2,272.
Between 1884 and 1907 the village club, Chirk Amateur Athletic Association Football Club, provided 20 Welsh internationals , whilst another 4 natives of Chirk were capped whilst playing for other clubs.
The club also won the Welsh Cup 5 times between 1887 and 1894.
The success of the small mining community as a breeding ground for top class footballers is largely due to the efforts of one man, T.E. Thomas. 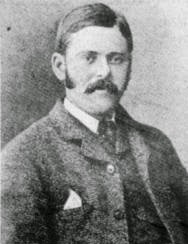 Thomas was born in Ystalafera, South Wales in 1853. He was a schoolmaster at Chirk National School.
In 1876 when the locals decided to form a club, Thomas was appointed secretary (he also played for the club, alongside employees of the local coal mines).
Thomas indoctrinated his pupils in the importance of accurate passing, ball control and keeping the ball on the ground. These were very progressive ideas at the time.
In 1890 Thomas became became president of the Football Association of Wales.

The rise of professionalism in the 1880's saw an increased movement of players away from the villages of North East Wales into the North West of England and the Midlands. Examples among the players listed are Joe Davies, who moved on to Everton, and Di Jones, later of Bolton Wanderers and Manchester City.
In addition to the 20 players above, the following Chirk players gained international honours whilst playing for other clubs: