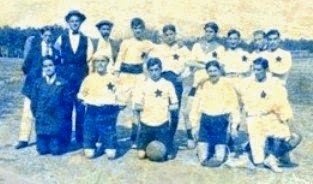 Initially founded as Football Club de Tunis in 1904, Racing is Tunisia's oldest club.
The first league in Tunisia was inaugurated in 1907.
Initially 5 clubs participated: Racing Club de Tunis, Football Club de Tunis (not connected with the club of 1904), Sporting Club de Tunis, Lycée Carnot and Collège Sadiki (the last 2 were school sides).
During the following 2 years membership of the league changed, and no champion was decided until 1909. By this time the league had grown to 7 members , Sporting, Racing and Football being joined by Emile Loubet Club, S.C. Bizerte, Alliance Sportive and British Football Club.
Racing eventually emerged as champions, defeating Sporting in a play off.
Tunisian football lapses into obscurity then until 1920, when Racing won a precursor of the Coupe d'Afrique du Nord (contested by teams from Algeria, Tunisia and Morocco). No Tunisian side succeeded in official Coupe d'Afrique du Nord tournaments.
Racing won their domestic league in 1921-22, and were runners up to the splendidly named Avant Garde in the first edition of the Tunisian Cup in 1922-23.