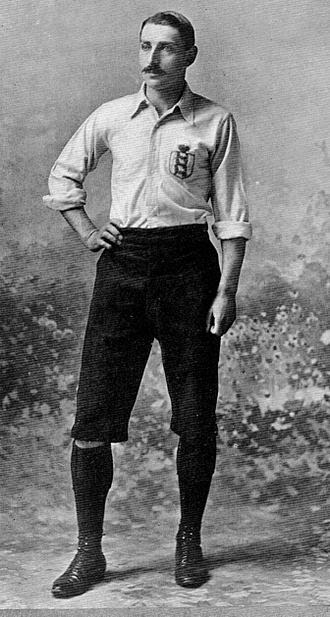 The best-looking man of my acquaintance - C.B Fry
The most aristocratic-looking man I ever saw - J.A.H Catton
The richest man who ever played football for England - Sir Frederick Wall

Cunliffe Gosling was an inside forward who  played in 5 matches for England (1892-97) and never finished on the losing side. He represented Cambridge University, Old Etonians and Corinthian FC.
Gosling confirmed the archetype that in Victorian England  those from a privileged background were more robustly built- he was 1.87m and 83 kg.
Sir Frederick Wall's statement was based on the fact that Gosling came from a wealthy landed family, and that when he died in 1922 his estate was worth the equivalent of £21.2 million in today's money.