From the Secretary of the Football Association

A match between the leading representatives of the Scotch and English sections will be played at The Oval on Saturday the 19th February next, under the auspices of the Association.  Players duly qualified and desirous of assisting either party must communicate with Mr AF Kinnaird of 2 Pall Mall East, SW or Mr J Kirkpatrick, Admiralty, Somerset House, WC on behalf of the Scotch, or with Mr Charles W Alcock, Boy Court, Ludgate Hill, EC or Mr RG Graham, 7 Finch Lane, EC on the part of the English.
The Field 22nd January 1870 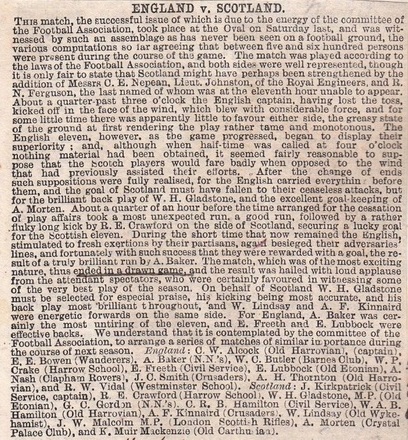 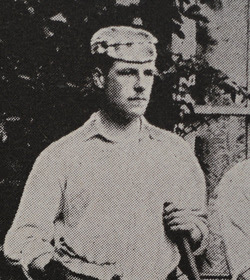 Charles Alcock's deeds speak of a missionary zeal for promoting Association Football. He was, of course,  the founder of the FA Cup tournament. Additionally Alcock was also a prime mover in the development of international football.
Prior to the first officially recognized international in 1872  Alcock arranged a series of matches between 'England' and 'Scotland'.
These matches were far from the formal occasions that international matches became within a few years. They were played at The Oval, the headquarters of English football at the time, on account of Alcock's ease of access to the facilities as secretary of Surrey County Cricket Club, but watched by small crowds ( ranging from 500 to just under 1000- football was not a great draw as a spectator sport in the early days-cricket was still very much the national game- 2,000 watched the 1872 Cup Final  at The Oval and between 2,500 and 4,000 were at the 1873 international at the same ground).
The main barrier to these games being considered true internationals is the absence of Scotsmen! They were, effectively, between scratch teams drawn from Alcock's Old Boys' associates- the class of  men who at the time made up the players, administrators and enthusiasts of the game. The Morning Post described the team for the 5th match as 'the Scotchmen of the metropolis'.
The first match featured only one man who was actually born in Scotland- Kenneth Muir Mackenzie. His teammates were 6 English born, and  1 each born in Wales, Jersey, Canada and India.  The excellent historian Andy Mitchell has established that 10 of the Scotland team did in fact have bona fide Scottish heritage.  For good measure 3 of the England team were born oversea (2 in India and 1 in Ireland).
There were only 2 non public schoolboys involved-Alfred J. Baker and Alexander Nash. The old man of the England XI was Edward E. Bowen (32) whilst Morten in opposition was about 38. England featured 3 teenagers (Vidal-16, Thornton-17, Crake-18 ) and 'Scotland'  2 (Crawford -17, Gordon-19).
The rather casual approach might be reflected in the fact that for the  first match there were no officials , and that Crawford scored Scotland's goal  from long range when the English decided to play with 11 outfielders and no goalkeeper.
The teams for the first match lined up as follows. Note that many of the players were associated with multiple clubs (such was the nature of the clubs- metropolitan institutions and old boys clubs). Here I have recorded the player affiliation as it was represented in the press at the time.
All 5 matches were played at The Oval.