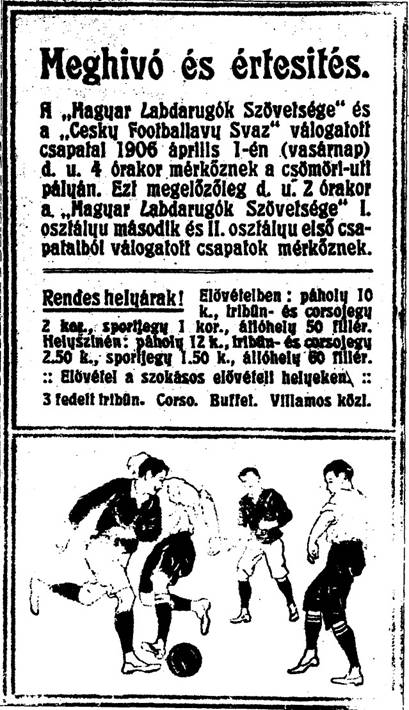 This is an advertisement / invitation for the game between Hungary and 'Cesky Footballavy Svaz' (Czech Football Association) played at Budapest's Millenáris on April 1st 1906.

Cesky (Čechy) are usually referred to as Bohemia in English. Forerunners of Czechoslovakia, but subject to the confusion of being a part of the Austria Hungary empire and struggling to promote a separate national identity. In fact in the geographical area of Bohemia there were also German and Austrian football clubs. For example, DFC Prag, who were affiliated to the DFB (German FA)- essentially a German Club made up of German players competing in German competitions even though they were based in Prague.
The Czech Football Association selected only Czech players based with Czech clubs.
Unfortunately, Bohemia's two leading Czech clubs, Slavia and Sparta (both of Prague) did not make their players availble for this match. The Hungarians saw this as a slight.
This was Bohemia's first international fixture. They played 6 in total from 1906 to 1908, when  FIFA , influenced by the Austro-Hungarian monarchy, suspended Bohemia's membership.
The match, watched by about 5,000, ended in a draw. Jindřich Valášek put Bohemia in front just after the hour, Jenő Károly equalizing in the 80th minute.