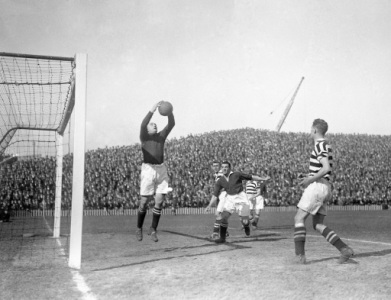 Modern day audiences might find it hard to believe that once upon a time Manchester United had to beat Millwall in the last game of the season in order to stay in Division 2.
As the end of the 1934-35 season approached with 41 out of 42 rounds of matches completed Lincoln City were already down with 25 points.
Notts County, in 18th, were safe on 35 points.
In between were Swansea Town (33), Millwall (33) and Manchester United (32).
United had conceded 85 goals, 10 more than any other team in the Division, and had lost 22 of 41 matches played.  Their average home attendance was just 18,500. Manchester City were drawing crowds of 30,000 plus. And so to 05.05.1934. Swansea Town would have been relieved that their crucial match was at home, they hadn't won an away game all season. They duly defeated Plymouth Argyle 2-1 at the Vetch Field with goals from Jack Firth and Wilf Milne.
Meanwhile at the Den Jackie Cape and Tom Manley gave United a 2-0 win in front of a crowd of 35,000. The Sheffield Independent described the result as one of the most remarkable successes of the day. 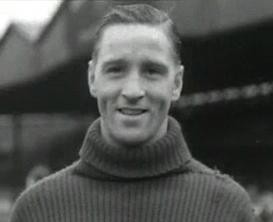 Manley (left) opened the scoring in the 9th minute and Cape (below) added the second in the 48th. Some controversy surrounded Cape's goal as there were suspicions of offside.